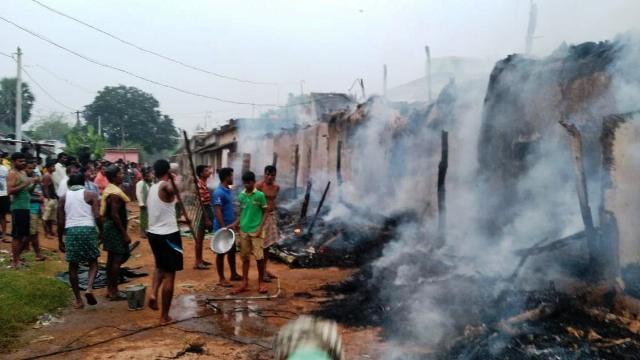 Dhenkanal: At least 10 houses were reduced to ashes after a fire broke out at Kendudhipa village under under Kamakshyanagar police limits in Dhenkanal district in the wee hours today.

Though no casualty or injuries was reported, property worth lakhs of rupees were destroyed in the mishap.

Sources said a fire broke out in the house of one Nrusingha Nayak at the village due to short circuit and later engulfed the adjoining houses. Around 10 housed were completely gutted by the time the fire fighting team reached the spot to douse the flames.

On receiving information, Kamakshyanagar Sub-Collector Bisnuprasad Acharya, Tehsildar Sudhansu Mohanty visited the spot to take stock of the situation and made arrangements to provide relief to the victims.