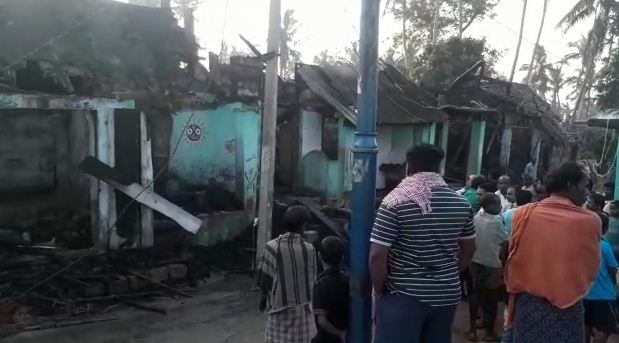 Puri: A major fire broke out at Machhapada village under Delanga block of Odisha’s Puri district late last night gutting around 21 rooms and rendering as many 11 families homeless.

On the other hand, locals alleged that the fire mishap was a fallout of past enmity between Halu Mohanty and Bhagirathi Swain of the village. A dispute was prevailing between the two and Mohanty scolded Swain last evening. Mohanty and his associates set the house of Swain on fire, following which the flames engulfed other adjacent houses, the villagers alleged.

Properties worth lakhs including crops and valuables were reduced to ashes in the blaze. On being informed, Fire personnel reached the spot and doused the flames after a five-hour long effort.

On the other hand, police have detained a person for questioning in connection with the incident.

Two drown in river during Boita Bandana in Odisha’s Rayagada