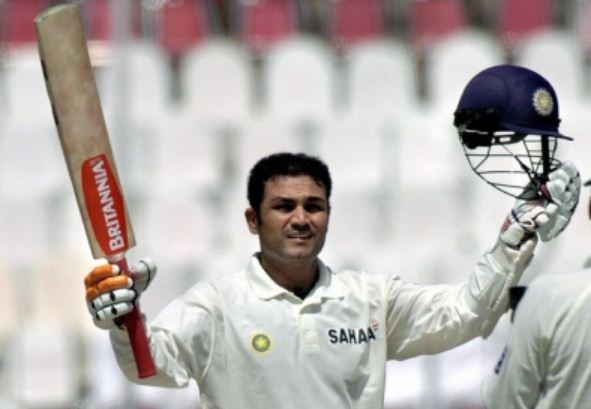 New Delhi: Seventeen years ago this day, swashbuckling batsman Virender Sehwag provided millions of his fans plenty to rejoice as he hammered India’s first ever triple Test century in Multan — and went on to score another triple and missed a third one by a whisker.

Playing only in his 21st Test match, Sehwag, then aged 25 years and 160 days, achieved the feat on the second day of the first Test of the series against Pakistan. He ended the first day of the match at 228 not out and soon after lunch interval on the second day, he stepped out to off-spinner Saqlain Mushtaq and lifted him over the long on boundary for a six to complete the triple in fabulous style.

March 29, 2004, was a day to remember. However, the Indian team hotel in Multan — and particularly Sehwag’s room in Holiday Inn — bore a normal look that evening. There were no celebrations; no fireworks on the floor on which the Indian team stayed. On reaching his room, Sehwag had a back massage, done by a Pakistani masseur. Later, he ordered a vegetarian meal in his room. All this while, only one player, Murali Karthik, walked into Sehwag’s room.

Asked at the time about the congratulatory messages that might have come in from India, Sehwag said Jagmohan Dalmiya, the then president of the Indian cricket board, had sent a congratulatory text and Hero Motorcycles owner Pawan Munjal a flower bouquet that was displayed in his room.

“The team has decided that there would be a function to honour me in India on our return,” Sehwag had said sitting in his room. Nothing of the sort happened in India, though a bigger function of a different type happened soon after the team’s return – Sehwag’s marriage to Aarti – that became national headline news.

On the 2004 tour of Pakistan, Sehwag was relatively new to Test cricket, after captain Sourav Ganguly dramatically drafted him into the Indian Test team in South Africa in 2001 after a pretty successful ODI series that preceded the Tests.

However, Sehwag showed no signs of nervousness as he took on a world class Pakistani bowling attack comprising quality speedsters Shoaib Akhtar, Mohammad Sami, Shabbir Ahmed, and Abdul Razzaq, and a top-class off-spinner in Saqlain in Multan.

“After playing that innings I got a better idea of Test cricket. My thinking changed and I gained a lot of self-confidence from that knock. I started thinking of playing 150-plus innings,” Sehwag had said a few years later.

“At the time, I used to take the leg stump guard or stand outside the leg, and had an open stance. I used to have difficulty in playing some deliveries with that stance. I changed to the middle stump guard and now I can easily play deliveries on both sides of the stumps,” he had said.

Sehwag’s 309 in Multan was part of his purple patch that included 11 consecutive centuries that were all scores of 150-plus – a unique feat in the 144-year history of Test cricket. The streak began with the 195 against Australia in Melbourne in 2003 to and 201 not out against Sri Lanka in Galle in 2008. His 309 was the second century of the 150-plus scores.

And, 17 Tests after the Chennai carnage, Sehwag came agonisingly close to becoming the first batsman in the annals of Test cricket to score three Test centuries, in 2009. But he missed the mark by a mere seven runs when Sri Lankan off-spinner Muttiah Muralitharan caught him off his own bowling for 293 (254 balls, 40x4s7x6s) at the Brabourne Stadium in Mumbai, breaking many hearts.

Only three other batsmen — Donald Bradman of Australia, West Indian Brian Lara, and Chris Gayle of West Indies – have scored two triple centuries in Test cricket. The only other Indian to score a Test triple is Karun Nair, who scored 304 not out against England in Chennai in 2016.

A product of limited overs cricket, Sehwag made a name in the longest format of the game — and gave a different definition to opening the innings in Test match cricket. If not for his weak eyesight – and a run of poor form in 2007 — he could have scored 10,000 Test runs.