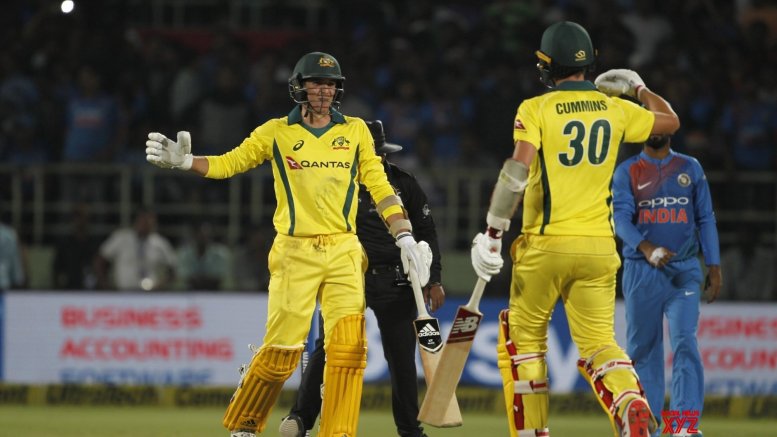 Visakhapatnam: Australia made heavy weather of a chaseable target but ultimately scraped past the line in the final over to beat India by three wickets in the first T-20 at the Y.S. Rajasekhara Reddy ACA-VDCA Cricket Stadium here on Sunday to take a 1-0 lead in the two-match series.

Set to make 127 for victory, the tourists were well on course riding Glenn Maxwell’s 43-ball 56 but wickets in quick succession towards the end of their chase made life difficult and in the end it was down to two runs needed off the last delivery.

Pat Cummins (7 not out) hit the winning runs off Umesh Yadav who had 14 runs to defend in the 20th over but erred in line and length to throw away the advantage Jasprit Bumrah (3/16) had given them late on.

Umesh was hit for a boundary each by Jhye Richardson (7 not out) and Cummins.

Bumrah had bowled an incredible 19th over to bring India back in the contest, removing Peter Handscomb with a short ball and then dismissing Nathan Coulter-Nile with a fierce yorker after having dismissed skipper Aaron Finch (0) in his first spell.

Australia were in control till the 15th over with Maxwell and Darcy Short (37 off 37) stitching together a partnership of 84 runs for the third wicket.

India’s wrist spin pair of Yuzvendra Chahal (1/28) and debutant Mayank Markande (0/31) failed to deliver as the big-hitting Maxwell smashed both for towering sixes.

Chahal had the last laugh though, getting rid of Maxwell with a flighted delivery wide outside off-stump which the batsman failed to clear and holed out to Rahul at long-off.

Short was run-out after a mix-up with Handscomb and after Ashton Turner was sent back by Krunal Pandya, Australia were in a spot of bother at 102/5.

But Cummins and Richardson kept calm and sealed the win in the end.

Put in to bat, India started the innings steadily. But a poor shot selection from opener Rohit Sharma saw India losing its first wicket in the third over as Pacer Jason Behrendorff dismissed the opener.

Unperturbed by the fall of wicket, Rahul, playing first time after a chat show controversy, hammered the Australian bowlers all round the park, along with skipper Virat Kohli (24).

But just when things seemed good in the middle, the skipper lost his wicket. Kohli was caught at the boundary by Coulter-Nile off Adam Zampa. His 17-ball innings included three boundaries.

New batsman Rishabh Pant’s (3) bad form in the shortest format continued as he got run out, due to some brilliant fielding by Behrendorff.

After adding few runs, while trying to increase the scoring rate, in-form Rahul was also caught at the mid-off. His 36-ball innings was laced with six boundaries and one six.

Since Rahul’s dismissal in the 13th over, the hosts failed to find the fence between until the last over as Dinesh Karthik (1) and Pandya (1) returned to the pavilion without bothering the scorers much with India managing 67/2 at the halfway stage.

With five overs go to, India were 100/6 and it was all on Mahendra Singh Dhoni (29 not out) to roll back the years and stage a grandstand finish.

But the veteran failed to deliver and could manage to hit only one six in the final over, refusing to take a single on several occasions with Yuzvendra Chahal (0) at the other end. Umesh Yadav (2) was out earlier without being able to support the former captain.

India managed only 46 runs in the last 10 overs. For the visitors, Coulter-Nile returned best figures of 3/26, while Behrendorff, Zampa and Pat Cummins chipped in with one wicket each.

A teacher who led a hockey revolution among tribals in Jharkhand