277 stranded Indians brought back from Iran 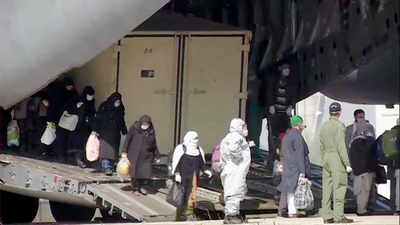 New Delhi: Over 270 Indians stranded in Iran were brought back to India on Wednesday morning.

According to sources, Iran-based Mahan Air brought back 277 Indians from Tehran to Delhi and then all the passengers were taken to Jodhpur.

Last week, Centre had given permission to Iran-based Mahan Air for evacuating Indians stuck in the Middle Eastern country due to the outbreak of COVID-19.

As per plans, two ferry flights have been allowed to land in India. These will evacuate around 600 Indians from Iran. The first such flight arrived on Wednesday, while the second flight will be operated on March 28.

Presently, only Mahan Air and Iran Air operate flight services between India and Iran. However, last month, the services of these two airlines to India were discontinued to prevent the spread of the global pandemic.

Earlier, Mahan and Iran Air evacuated Indians from the Middle Eastern country on March 13 and 15.

After preliminary screening conducted at the airport upon arrival, the evacuees were shifted to the Indian Army quarantine facility established at Jodhpur Military Station.

“The Army in coordination with the Rajasthan State Medical authorities and Civil Administration, Jodhpur has made adequate medical and administrative arrangements to cater to a comfortable stay and provide prophylactic medical support,” Indian Army stated.

The facility has a dedicated team of Army doctors, who will be constantly monitoring the health parameters of the evacuees for the duration of their stay.

Indian Defence forces have set up quarantine bases across the country for 5000 people who are suspected to be affected by coronavirus or are coming from coronavirus-affected countries.

The Indian Army has set up quarantine bases for around 4000 people and Indian Navy and Indian Air Force set up facilities for 1000 people.

Coronaviruscovid-19stranded indians brought back from iran

Silver City Cuttack gears up for first of its kind mini…