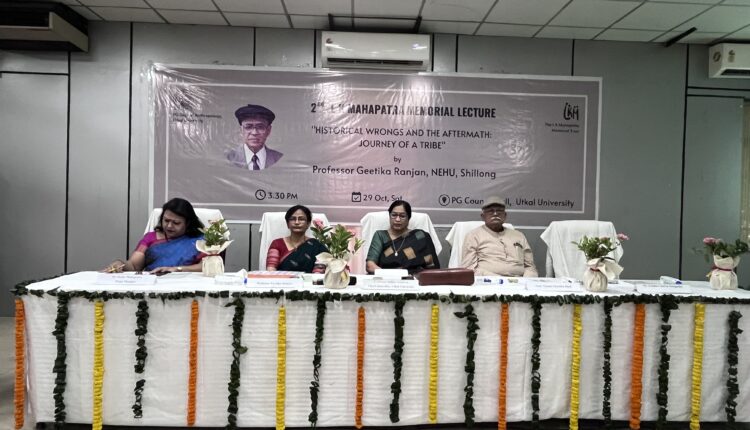 Professor Lakshman Kumar Mahapatra (1929-2020) was a world-renowned anthropologist and educationist from Odisha, who spent most of his career at Utkal University establishing the discipline of anthropology in Odisha and turning the Anthropology Dept at the University into a vibrant and pioneering intellectual space that led to it becoming one of the two Centres for Advanced Study in Anthropology in India. He had conducted pioneering research in the country in South East Asian Studies and the now established fields of development anthropology and population anthropology. He was also Vice-Chancellor of Utkal and Sambalpur Universities and Director and later Chairman of the Nabakrushna Choudhury Centre for Development Studies.

The 2nd LK Mahapatra Memorial Lecture titled, “Historical Wrongs and the Aftermath: Journey of a Tribe” was delivered by Professor Geetika Ranjan, one of India’s most eminent contemporary anthropologists, based at the North Eastern Hill University (NEHU), Shillong. The 1st Memorial Lecture had been delivered last year by Professor P C Joshi of Delhi University in an online mode because of the Covid-19 pandemic.

In her lecture, Prof Ranjan discussed the case of the Bhoksa, a PVTG (particularly vulnerable tribal group) from the state of Uttarakhand. Despite plans and schemes for improving its state, the tribe continued to remain weak and vulnerable, she stated. She argued that certain historical wrongs in policy making and implementation have left deep ineradicable scars, which render the later amelioration plans less effective. She discussed the reasons which make it very difficult to undo the wrong already done.

The Head of Department of Anthropology, Prof Kanhu Satpathy gave the welcome address and the meeting was presided over by the Vice-Chancellor of Utkal University, Professor Sabita Acharya, also a Professor of Anthropology and student of Professor Mahapatra. Prof N C Dash, who retired from Fakir Mohan University, spoke about the intellectual legacy of Prof Mahapatra. The meeting was attended by eminent scholars and students of anthropology and social sciences from Utkal University and other Universities and colleges.

The L K Mahapatra Memorial Trust had earlier this year set up the LKM Centre and Library at 16 Satyanagar, the residence of Professor Mahapatra. It was inaugurated by the Union Education Minister Dharmendra Pradhan, also a student of Anthropology and Professor Mahapatra. The LKM Centre is a reference library on social sciences that is being managed by the Trust and Bakul Foundation, which operates from the same premises.