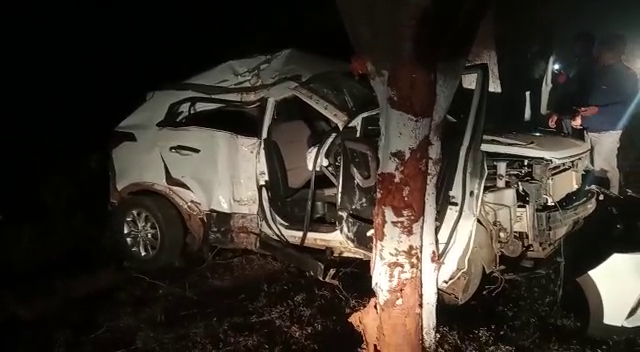 Nabarangpur: Four persons died and one sustained critical injuries after an SUV they were travelling in hit a roadside tree near Saraguda area under Dabugam police limits in Nabarangpur district late on Friday night.

The deceased persons have been identified as Sheikh Saddam (25), Rabin Hial (26) and Saban Benia (25) – from Nabarangpur town – and Ansar Khan (24) from Papadahandi area. and

According to reports, five youth were travelling in an SUV (Hyundai Creta) bearing the Registration No. OD 10 K7786 from Nabarangpur to Umerkote. The vehicle rammed into a roadside tree at Saraguda area reportedly due to fog killing three occupants on the spot.

Sources said that the youth were travelling together to see Rabin Hial off in Umerkote where the latter was working with a finance company. However, their vehicle hit a tree after it lost control on the state highway near Saraguda. While Sheikh Saddam, Rabin Hial, Saban Benia died on the spot, Ansar Khan succumbed to injuries under treatment at the SLN Hospital.

On receiving information, the Dabugam police reached the site and rushed two injured persons to the Dabugam Community Health Centre. Later, the victims were taken to the SLN Hospital in Koraput.

The bodies will be handed over to their respective families following post-mortem in the afternoon today.