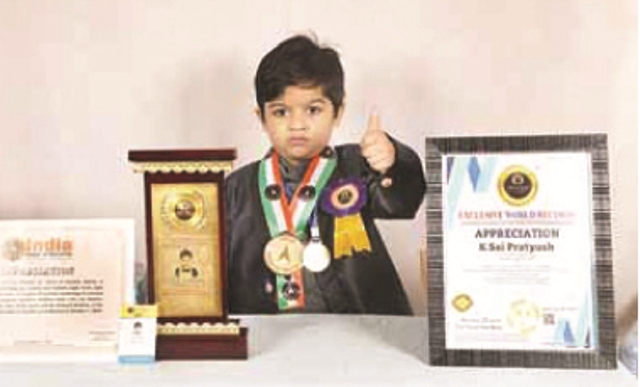 Cuttack: A 3-year-old wonder boy from Odisha has entered into the Exclusive World Records for his talents at a little age.

K Sai Pratyush, son of K Sai Kishore and Deeptirekha Mohanty of Silver City Cuttack, has achieved the feat for reciting rhymes in a broken manner and English alphabets.

Sai Pratyush resides at CDA Sector-11 in Cuttack city. Currently, he is pursuing Pre-nursery at a private school. As his father is a South Indian and mother is from Odisha, he had started speaking in multiple languages at a very early age.

He can recite 36 types of rhymes in Odia, Telugu, Hindi and English languages. Besides, the boy filled in various talents can chant various hymns and he has strong IQ.

Pratyush received the certificate in October last week this year. Also, he has entered the India Book of Records for his talents.