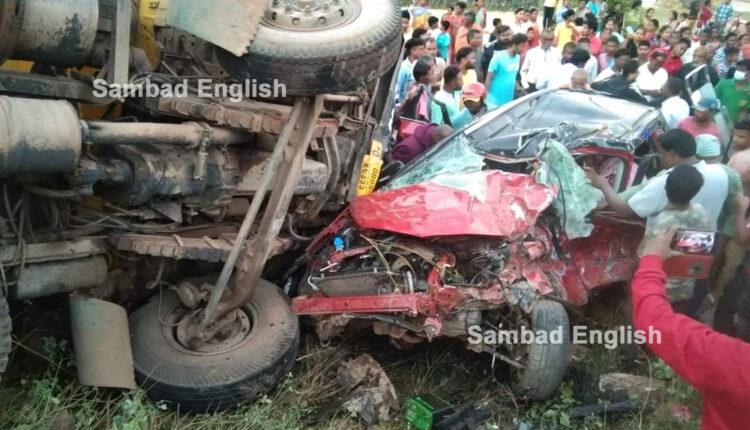 Ghatagaon: In a tragic road mishap, at least four persons were killed and one more sustained grievous injuries after a speeding Hyva truck collided head-on with a car in which they were traveling near Badaposi Square on NH-20 under Sadar police limits in Keonjhar district, today.

Four persons have been identified as former Ghatagaon block chairperson Prakash Kumar Nayak, his brother Chitta Ranjan Nayak and two brothers of another family namely Hrusikesh Singh and Narottam Singh, all from Pipilia village under this block, a senior official in Sadar police station said.

Occupants of the car had come to Keonjhar town to visit an ongoing Meena Bazaar (a fun-fair) organised on the occasion of Kali Puja. However, the ill-fated car met with an accident leading to untimely deaths.

According to an eyewitness, the road mishap took place at around 5.15 pm, when the car was on its way from Keonjhar town. Three occupants of the car died on the spot and the other died while undergoing treatment at Keonjhar district headquarters hospital (DHH). Besides, an injured is under treatment at the government-run health facility in critical condition, the eyewitness added.

On being informed, a team of Sadar police and fire services personnel reached the spot. The bodies were recovered and a detailed probe was initiated.