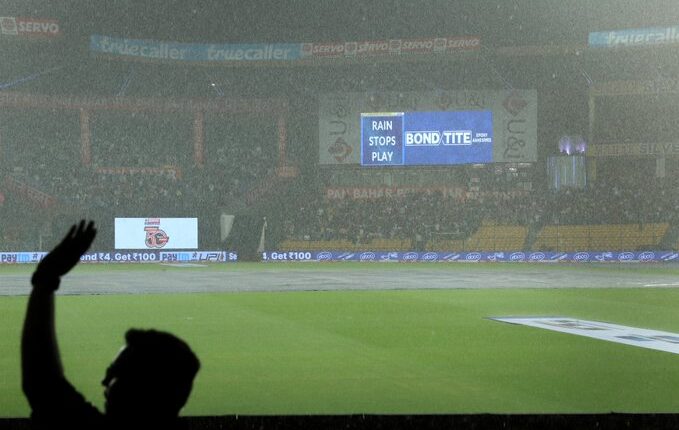 Bengaluru: It was supposed to be a cracking decider for a terrific five-match series between India and South Africa despite the threat of rain playing a spoilsport looming around. Eventually, on Sunday, the rain had the final say in causing the winner-takes-it-all-affair to end in a washout, with the series shared between India and South Africa at 2-2, with just 16 minutes of play possible.

Stand-in skipper Keshav Maharaj, coming in for an injured Temba Bavuma, won the toss, maintaining South Africa’s clean slate in winning the tosses in the series. The visitors brought Reeza Hendricks, Tristan Stubbs and Kagiso Rabada into the playing eleven in place of Bavuma, Marco Jansen and Tabraiz Shamsi. India, meanwhile, were unchanged, sticking to the same eleven right from the series opener in New Delhi, ten days ago.

Even before a ball had been bowled after South Africa pushed India into batting first for the fifth straight time, the rain came down pouring. Covers were brought on immediately and players from both teams rushed into the dugout.

After a delay of 50 minutes, the match began, now reduced to a 19-over-a-side affair. Ishan Kishan teed off with back-to-back sixes, slog-sweeping Keshav Maharaj with elegance and power at the same time over mid-wicket and long-on.

But, in the next over, Kishan was deceived by a slower ball which dipped on him off Lungi Ngidi and lost his off-stump. The off-cutter again did the trick for Ngidi in the fourth over as Ruturaj Gaikwad mistimed the loft to mid-on in the fourth over.

Rishabh Pant was off the mark straightaway with a glance through the short fine leg before the rain came again, this time heavier.

In between, umpires Anil Choudhary and K.N. Anantha Padmanabhan told the broadcasters that the cut-off time for a 5-over game is 10:02 pm with 25-30 minutes needed for mop-up operations.

But the rain didn’t relent as the confirmation for the match’s abandonment arrived. It meant that a closely-fought series, where South Africa won the first two matches before India made a comeback with back-to-back victories, ended without the decider it deserved due to rain playing a spoilsport.

It also signified that South Africa keep the record intact of not having lost a white-ball series in India since 2011.