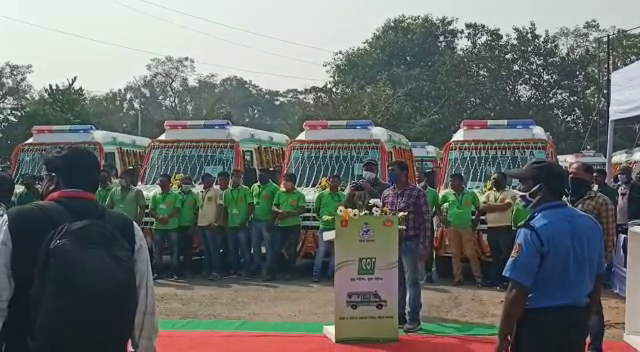 Bhubaneswar: With an aim at strengthening emergency healthcare services in Odisha, the State Government today added 84 more vehicles to the existing 108 Ambulance Service.

Chief Minister Naveen Patnaik flagged off the new ambulances at the Transport Bhawan in Bhubaneswar.

The Government has allocated Rs 104 crore for the additional vehicles for the next 5 years and the ambulances will be provided to 27 districts.

The Free Ambulance service managed by Chikitsa Healthcare is functional with 518 vehicles (108 Ambulance) and 500 Janani Express 102 Ambulances for pregnant women and ailing children in total 30 districts.

The addition of new ambulances to the scheme has been made to improve response time and reduce call drop issue occurring due to unavailability of ambulances in different districts.

Worth mentioning, the State Government has been providing the free ambulance services since March 5, 2013 benefitting more than 60 lakh people in past 7 years. The government has also provided 6 emergency boats for people in cut-off areas of the State.

Another 245 test COVID-19 positive in Odisha