In the probe that followed, it came to light that 10 poachers had laid out the live wire to kill wild animals. 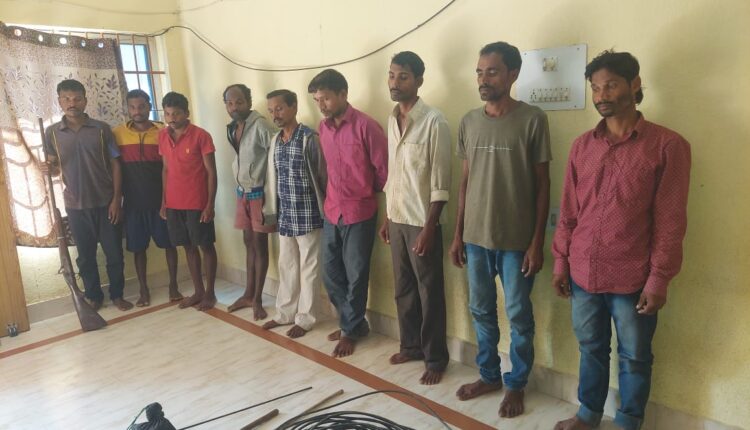 Reamal: Days after a man was electrocuted to death after coming in contact with a live wire reportedly laid out for wild animals, police has arrested nine persons for their alleged involvement in the case in Reamal block of Deogarh district of Odisha here today. The accused are Bisnu Pradhan, Taanlu Sahu, Pratap Kisan, Tanu Pradhan, Bikas Kisan, Arjun Pradhan, Pramod Pradhan, Manas Sahu and Babuli Sahu of Nisabira under Tarang panchayat in the block.

The man, identified as Deba Sahu (50) of  the same village  had died on Monday but family members got to know about it the next day after which his son Kuna Sahu had reached out to the local police and filed a complaint.

Police said they acted on the complaint and started investigation after seizing the body for postmortem. After the autopsy was carried out at the district headquarters hospital, the body was handed over to family members. In the probe that followed, it came to light that 10 poachers had laid out the live wire to kill wild animals.

Reamal IIC Srimati Pradhan, who led the investigation, shared that the poachers were active in Nisabira and adjoining villages. Police meanwhile got to know that the accused were hiding in the nearby jungle. On Saturday morning around 9.45 am, a 10-member police team raided the area after getting reliable tip-off of the poachers’ whereabouts. The poachers were reportedly hiding in two groups but police managed to apprehend and arrest them, the IIC said, adding that country gun, sharp weapon, 500 metre electric wire, 200 metre aluminium wire, bamboo stick to hook the wire, etc were seized from their possession.