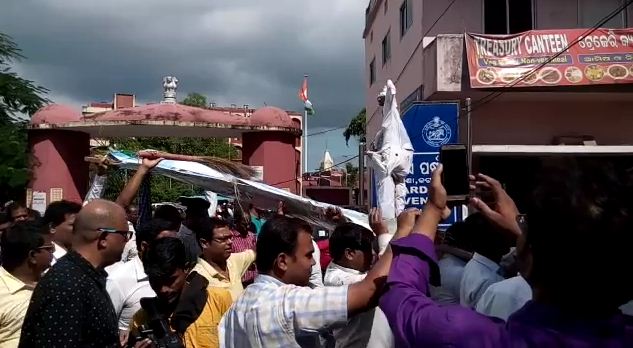 The lawyers also resorted to anti-government sloganeering. Similar scenes were witnessed today at courts in Balasore, Bhadrak, Jajpur and Angul districts as effigies of the CM were set on fire by lawyers.

The agitators have opposed the deployment of policemen at the High Court Bar Association and alleged that the state government is trying to weaken the strike through the members of BJD Legal Front.

The Orissa High Court Bar Association had earlier declared to intensify its strike and burn effigy of Chief Minister Naveen Patnaik in front of 164 Bar Associations across the state.

On the other hand, the Bhubaneswar Bar Association has decided to resort to a cease-work for two days supporting the agitation of the High Court lawyers. However, the association has disliked the act of burning effigy of the CM and decided not to do so.