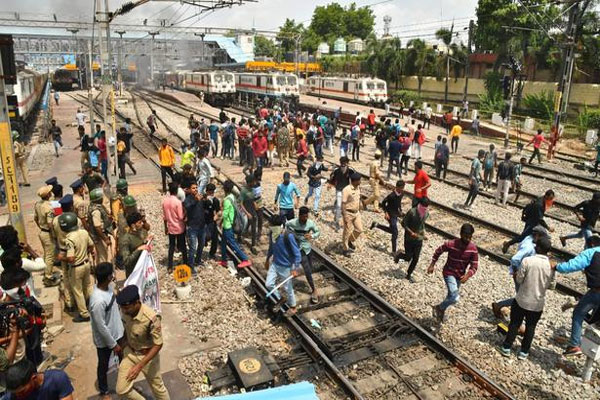 Share
Hyderabad: One person was killed and three others injured in the police firing on youths protesting at the Secunderabad railway station on Friday against the Central government’s new military recruitment policy.

Police opened fire after the protesters went on a rampage at the station setting afire two trains and vandalising the station. The injured were admitted to Gandhi Hospital.

The situation continued to be tense as a large number of protesters remained in the station and on the tracks. The protesters were pelting stones on police while the latter were retaliating with firing of rubber bullets and teargas shells.

The Railway Protection Force, Government Railway Police and city police were trying to bring the situation under control.

Additional forces were rushed to the area which resembled a battle zone. Authorities have cancelled all the trains. With the Telangana State Road Transport Corporation (TSRTC) buses also being targeted outside the station, the corporation suspended bus services in the area.

Raising slogans against the Central government, the protesters also torched bogies of another train on the station, stalls, display boards and other railway property. They also dumped parcel articles on the tracks and set them afire.

The protesters, who were raising slogans of ‘Jai jawan Jai kisan’ and ‘Bharat Mata ki Jai’ ,demanded that the government scrap the recently announced scheme and continue the existing system of recruitment.

The youth were angry that the government cancelled the recruitment examination for which they had been preparing for the last 3-4 years. They said their protest would continue till the Centre scraps the new scheme.

Forces were also rushed to Kazipet and Jangaon railway stations as a precautionary measure.