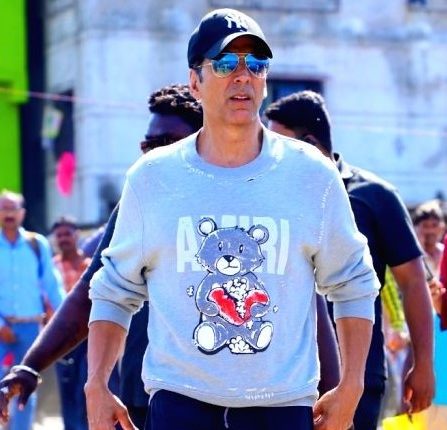 “Yes, Akshay Kumar shot for a day in Bandipur on Thursday for a Discovery channel programme,” Chief Wildlife Warden Sanjay Mohan told IANS. The Discovery channel had sought permission for shooting between January 28 and January 30.

The actual shooting with the actors, Rajinikanth and Kumar, was only for one day each on Tuesday and Thursday.

“The Discovery team had come to my office. We told them they would have to follow the rules strictly. If they fail to abide by the norms, we will cancel the shooting,” said Mohan.

The permission is needed from the Ministry of Environment and Forests (MoEF), the National Tiger Conservation Authority (NTCA) and others.

The Bandipur Tiger Reserve, an 874 sq km national park, was formed by integrating forest areas of erstwhile Venugopala Wildlife Park, which was established in 1941, and was later enlarged to its current size in the Chamarajanagar district, about 220 km southwest of Bengaluru.

However, a forest official was unhappy with the channel for not recognising the department’s role in nurturing the forest. “I told them you must include information in the programme and show how the forest guards are working tirelessly to save the forest,” said the official.

The forest department’s efforts might be part of script to be used by host Grylls in his piece to camera or some other form.

According to the official, the Discovery should not just use Indian forests for shooting programmes but also to recognise the Indian efforts for their conservation.

Meanwhile, Discovery India spokesperson Samir didn’t share how it would integrate the forest department’s message when IANS contacted him.