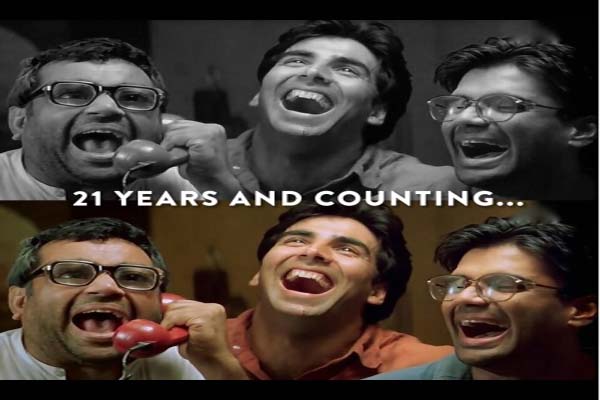 The Priyadarshan directorial had opened on March 31, 2000 and is counted among the greatest comedies ever made in Bollywood.

“No wonder we underestimate how quickly time flies. It seems I blinked, and 21 years went by. What a film we made @priyadarshandir @akshaykumar @SirPareshRawal @GulshanGroverGG #Tabu. Missing #OmPuri ji very dearly today,” Suniel Shetty tweeted.

Commenting on Suniel’s tweet, Akshay Kumar wrote: “Agreed! Even we didn’t know back then what a film we were making, each scene better than the other. Specially love this one: dhoti. Genius of Priyan sir and epic dialogues by late Neeraj Vora.”

“Hera Pheri” was followed by a sequel titled “Phir Hera Pheri” in 2006, and talk of a third film in the series keeps happening off and on. On Wednesday, commenting on the actors’ tweets, fans demanded a third installment in the franchise should be made.

Higher TDS if PAN not linked with Aadhaar by today

Cab driver sets himself on fire over rising fuel price