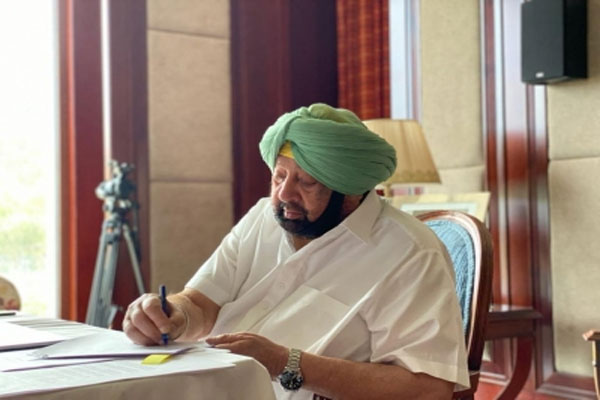 Chandigarh: Punjab Chief Minister Amarinder Singh on Saturday resigned from the post after a day-long political drama and said he resigned as he felt humiliated. At the same time, he said the “future politics option is always there and I will use that option”.

“I have given my resignation. The future politics option is always there and I will use that option,” the Chief Minister, who was active in the politics for 52 years, told the media after resigning from the post.

Without mincing words, he clarified that, “I have not resigned from myself”.

“I am in Congress, will discuss with my colleagues and then decide the future course of action,” he said.

Justifying his decision on his resignation in less than six months of the state going to polls, Amarinder Singh said, in the past two months the high command summoned the legislators thrice.

The resignation of the Chief Minister and his council of minister came just minutes ahead of a crucial meeting of the Congress Legislative Party (CLP).

The party’s high command is learnt to have conveyed to Chief Minister Amarinder Singh to resign to enable the election of a new incumbent.

According to some senior party leaders, the high command had categorically asked Amarinder Singh to step down.

The minute-by-minute changing political tussle began at about 11.42 p.m. on Friday when Punjab Congress in-charge Harish Rawat tweeted about the decision to hold an urgent CLP meeting on Saturday.

Almost 10 minutes later state party chief Navjot Sidhu directed all the MLAs to be present at the CLP meeting.

The announcement by Rawat was seen as an indication from the high command to appoint the new incumbent under whose helm the party will go to Assembly polls, slated in March 2022.

“Surprisingly, this bold leadership decision to resolve Punjab Congress imbroglio has not only enthralled Congress workers but has sent shudders down the spines of Akalis.”

The decision to call the CLP comes in the wake of the fresh letter signed by a majority of legislators who expressed dissatisfaction with Amarinder Singh and demanding his removal from the Chief Minister’s post.