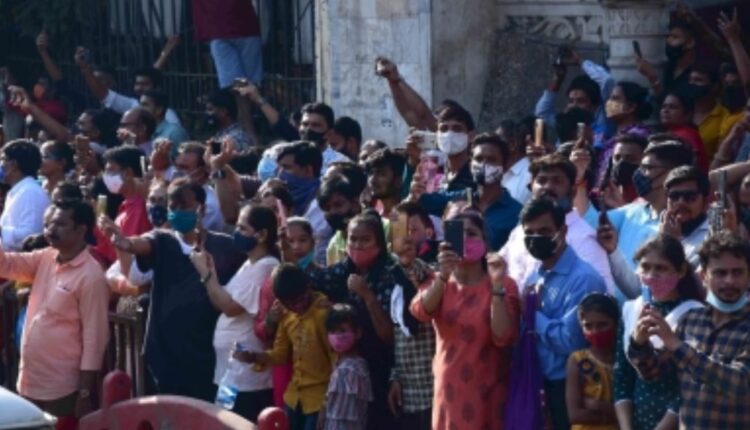 After the mourners paid their last respects to Lata’s body draped in the National Tricolour on a flower-bedecked pedestal, the Indian Army, Indian Navy and Indian Air Force contingents sounded the Last Post and accorded a salute as the gathering stood in attention.

The National Flag was carefully removed from her body, ceremonially folded and solemnly handed over to Lata’s nephew, Adinath Mangeshkar, who handed it to the other grieving family members present there.

Thereafter, a retinue of over half-a-dozen priests took charge and got down to the task of performing the Hindu rituals for the departed singer, along with a few male family members present alongside.

Shortly after the religious rituals were completed, the Mumbai Police contingent honoured her with another gun salute booming above the Shivaji Park.

Then, the sole brother among the five sibling, Hridaynath Mangeshkar stepped forward with other family members and he lit the funeral pyre with grief writ on his face – as his legendary Lata became immortal in a cloud of smoke – around 7.15 p.m., 11 hours after she breathed her last at 8.12 a.m. in the morning.

Earlier, Prime Minister Modi bid the final adieu to his beloved ‘Badi Didi’ (elder sister), and was among the first of the VVIPs at the venue where her body was kept for people to pay their last respects at Shivaji Park.

He was accompanied by Governor Koshyari, CM Thackeray, and other dignitaries like Deputy CM Ajit Pawar and Union Minister Piyush Goyal, many of whom enjoyed close family relations with the Mangeshkars.

The PM later walked over to the enclosure where the entire Mangeshkar clan including Lata’s sisters Asha Bhosale, Usha Mangeshkar, Meena Mangeshkar and Hridaynath Mangeshkar as well as grandchildren and other family members were present and offered his condolences to them.

After interacting briefly, Modi patted Uddhav Thackeray warmly, signifying he should take care of his health – as the CM has been suffering from a chronic spinal issue since the past three months.

Bharat Ratna Sachin Tendulkar – who had very close ties with the Bharat Ratna Lata – also turned up with his wife Dr Anjali and paid his last respects to the deceased singer.

Millions of ordinary Mumbaikars and other Indians mourned for the departed singer at the funeral venue and at their homes in the country and globally, marking the end of a musical era symbolised by their favourite Lata Mangeshkar.