Amid power cut, patients treated under torchlight at Baripada’s PRMMCH in Odisha

Since Sunday, the MCH is witnessing blackouts for atleast four hours daily which has posed serious problems for patients who are reportedly being treated in darkness with makeshift arrangements. 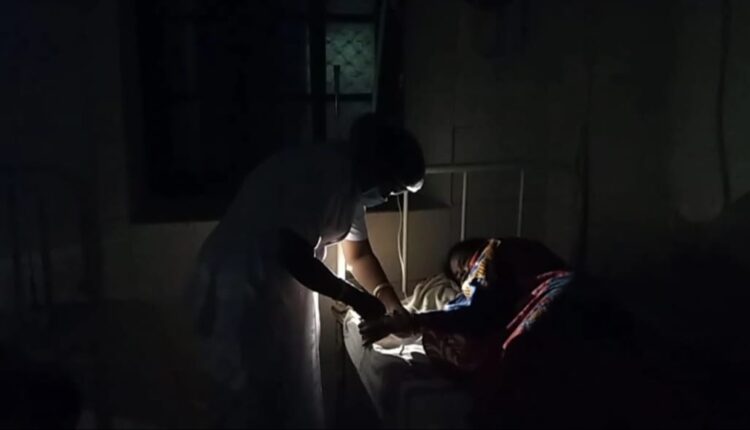 Baripada: Health care system in Odisha’s Mayurbhanj district has come in for a lot of criticism after a video of patients being treated under mobile torchlight at Baripada’s Pandit Raghunath Murmu Medical College and Hospital (PRMMCH) due to power cut, went viral on social media. The clip, which showed a hospital attendant administering saline to a patient with the help of mobile torchlight, has sparked considerable public outrage. It has also raised a lot of serious concerns about the quality of healthcare in the medical college and hospital as even the most basic facilities continue to elude patients.

Sources said Baripada town has been witnessing power cuts  due to thunderstorm and lightning for the last two days. But what’s raised concerns is the fact that electricity supply has been disrupted even in hospitals like the  PRMMCH which ironically is the largest health facility in the district. Since Sunday, the MCH is witnessing blackouts for atleast four hours daily which has posed serious problems for patients who are reportedly being treated in darkness with makeshift arrangements.

“Access to healthcare facility is still a distant dream for people in Mayurbhanj district. The coming up of the MCH had brought a ray of hope to us as we felt we would no longer have to go all the way to Cuttack for medical treatment. But after five years, our hopes are dashed as the  MCH lacks even the most basic infrastructure such as round the clock power supply for emergencies, some of the locals said.

Neither the district administration nor the elected representatives has done anything to address this important concern, they shared with much resentment.

Bhubaneswar: Youth beats younger brother to death for not studying