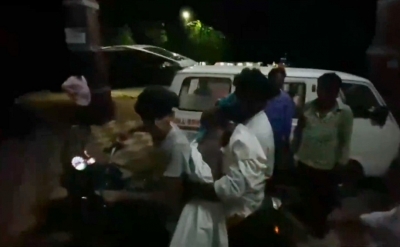 Tirupati: In a heart-wrenching incident, a man carried the body of his 10-year-old son on a motorbike for a distance of 90 km after the driver of an ambulance at a government-run hospital in Tirupati demanded huge money.

Unable to pay the hefty charges, the man sat pillion with the body in his lap while a youngster drove the two-wheeler. The man carried the body on the two-wheeler to Chitvel in Annamayya district, about 90 km from Tirupati.

Jesava, son of an agriculture worker, died of ill-health while undergoing treatment at RUIA Government General Hospital on Monday night. Ambulance driver at the hospital demanded Rs 10,000 to transport the body.

As the boy’s father was unable to pay the huge sum, he informed his relatives, who arranged another ambulance to bring the body home free of cost. There are allegations that the ambulance driver at the hospital did not allow the other ambulance to carry the body and insisted that the body should be carried in his ambulance.

Angry over the inhuman attitude of the ambulance driver, the man carried the body of the child on the motorbike.

The incident triggered public outrage. People claimed that similar incidents happened in the past and demanded strong action against the driver of the hospital ambulance.

They said the hospital authorities have stopped operating their ambulances and have colluded with the private ambulance operators who are looting the people.

Leaders of the opposition TDP and BJP staged a protest at the hospital. They tried to stop the Revenue Divisional Officer (RDO) who had come to the hospital to conduct a probe into the incident.

“My heart aches for innocent little Jesava, who died at Tirupati’s RUIA hospital. His father pleaded with authorities to arrange an ambulance which never came. With mortuary vans lying in utter neglect, private ambulance providers asked a fortune to take the child home for final rites,” he tweeted.

“The poverty-stricken father had no choice but to carry his child on a bike for 90 kms. This heart-wrenching tragedy is a reflection of the state of healthcare infrastructure in Andhra Pradesh which is crumbling under Y S Jagan Mohan Reddy administration,” Naidu added