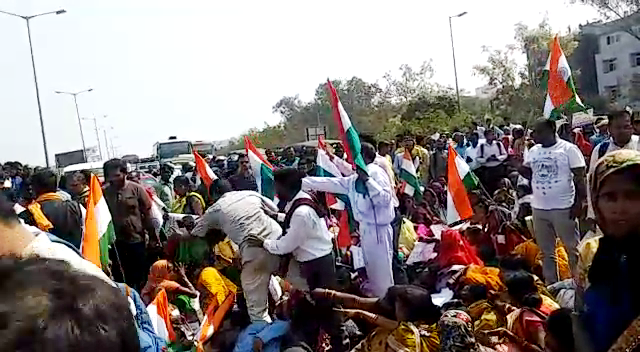 Bhubaneswar: A high voltage drama was witnessed in the State Capital today after hundreds of anti-liquor activists under the banner of Milita Odisha Nisha Nibarana Abhiyan blocked the national highway near Satsang Vihar here demanding a liquor-free Odisha.

The road traffic on the NH came to a grinding halt after the activists, including women, laid siege to the road as a mark of protest giving a tough job for police. The cops deployed on the spot were later seen dragging the protesters from the spot to clear the blockage.

The protesters alleged that the Naveen Patnaik has destroyed the State by giving license to liquor traders in the State.

“The Government is allowing liquor traders to operate everywhere in the State. Male members of our families are consuming liquor on regular basis putting their lives at risk,” said a woman activist.

“We want the Odisha Government to declare total prohibition in the State. We would dethrone the Government if Odisha is not declared a liquor-free State,” said another agitating member.

Earlier on the day, the anti-liquor activists took out a rally from Cuttack to the Capital city.