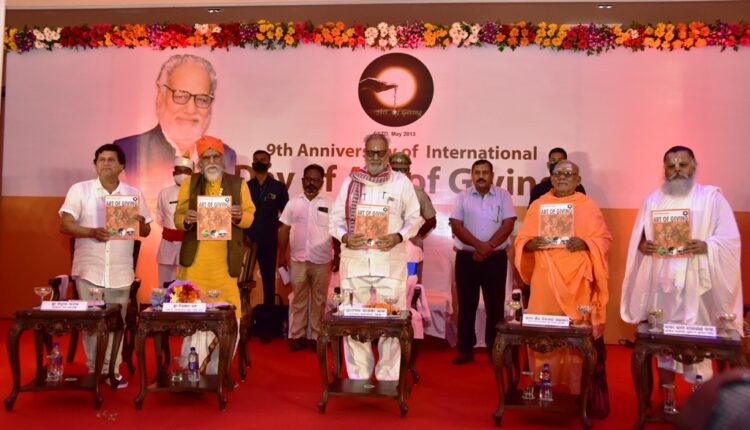 Bhubaneswar: India along with several countries across the world on May 17 celebrated the 9th anniversary of Art of Giving (AOG), a noble and pious initiative of KIIT, KISS and KIMS founder Prof Achyuta Samanta to promote an equitable and harmonious relationship in the society. The theme of this year’s celebration washope, harmony and happiness, with Prof Samanta disclosing moves to propose to the United Nations to proclaim May 17 as the Art of Giving day.

The AOG has transformed into a people’s movement, bringing hope and happiness to millions, especially those living on the margins of society. “Our objective is to spread the message of peace and happiness. We want to make it a universally accepted belief through the UN proclamation, the founder said.

He remained optimistic that the 10th anniversary of AOG next year will be celebrated as a UN proclaimed day, much like how the world celebrates June 21 as UN proclaimed International Yoga Day.

Governor of Odisha, Prof Ganeshi Lal, Chief Guest of the occasion, hailed the pathbreaking initiative of Prof Samanta and said his noble cause transcends all barriers and touches every soul in the society irrespective of caste, creed or religion.

“There is no difference between the commoner and the cosmos and that the quality of AOG,” the Governor said at the packed gathering that was attended by well-known faces from different spheres of the State.

The Governor drew parallels between AOG and devotion shown towards Lord Jagannath and said AOG is like “pulling down the heaven on earth”.

Taking the audience back to 2013 when AOG was conceptualized, Prof Samanta recalled the moment when this idea crossed his mind. He said he was heading to the Bengaluru city from the airport when he felt that the achievements that has come his way were all because of compassion exhibited by way of giving out to the society.

“I immediately called up some close friends and shared about AOG philosophy. They were ecstatic with the idea.”

Prof Samanta said that from the conceptualisation stage to finalizing AOG took them about six months and since then AOG has taken a universal appeal.

On the eve of the 9th celebration, he said, 15 places in Bangladesh had observed the day while 30 more events were organized in Delhi. Besides, every panchayat across Odisha celebrated the occasion in its unique way.

Swami Sivachidananda Saraswati, Secretary, Sivananda Centenary Boys’ School, Bhubaneswar, said our Guruji Swami Shivananda was always giving something or other to anyone, who approached him. In fact, we were calling our Guru a nickname “Givanand” looking at his giving spree. Today I have found the “Second Givanand” in Prof Achyuta Samanta looking at his philosophy of life.

Saying that we have to expand ourselves beyond the narrow ‘self’, Swami Siva Chidanand added that a time has come to rediscover our innerself so that we can do something for the world surrounding us and the Art of Giving philosophy would certainly help us in this regard.

Baba Ram Narayan Das, Founder-President, Unit-I Ram Temple, Bhubaneswar, in his speech observed that by arranging more than 1lakh meals in a day for over 30,000 inmates of KISS and family members of more than 10,000 families of KIIT and KISS Universities, Prof Achyuta Samanta is not only doing a yeoman service to the society but also spreading the message of Art of Giving by organising the food or “Anna” or rice as it is the epitome of our lifeline.

Declaring the philosophy of Indian mythology is that “Data ek Ram baki sab bhikari” Baba Ram Narayan Das added that Prof Achyuta Samanta should not deviate from his path as the meaning of his name explains, so that Art of Giving would get longtime patronage and would help people to disseminate the theme of Hope, Happiness and Harmony around the world.