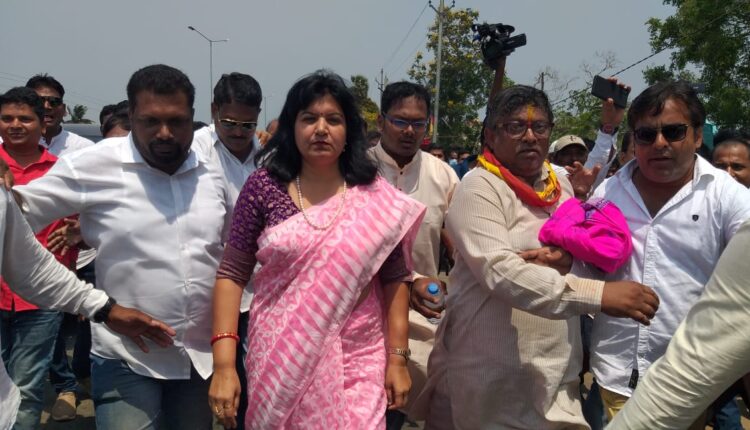 Puri: Bhubaneswar MP and BJP leader Aparajita Sarangi today came down heavily on the Odisha government during her visit to the Shree Jagannath Temple here.

The parliamentarian headed towards the pilgrim town from the state capital in a carcade with her supporters, this morning. Drama unfolded near Patapola at Chandanpur as Puri police stopped the carcade from going ahead.

The MP then alighted from the vehicle and started walking towards the destination along with her supporters.

On reaching the shrine, she offered prayers to the deities with folded hands and prostrated near the Aruna Stambha in front of the temple before going inside for darshan of Lord Jagannath.

Criticising the Odisha government over Srimandir Heritage Corridor Project, Sarangi said illegal digging activities are being carried out around the temple by the government without the permission of the Archaeological Survey of India (ASI).

“Nobody knows about the purpose of the construction activities, which are threat to the shrine. Puri MP Pinaki Misra is also unaware about it. The people of Odisha have the right to know about it and the government is answerable to them,” she said.

“The construction activities are being done legally without violation of any law. The High Court has not stayed the undergoing work during two hearings… She (Aparajita Sarangi) should analyse and understand it,” the Puri MP said.

“The people of the state want continuation of the project while Aparajita Sarangi is the one who is opposing it. Matters related to Lord Jagannath should not be politicised,” he added.

Earlier on March 31, Sarangi had raised the topic of Puri Srimandir Heritage Corridor Project in the Lok Sabha and alleged that the construction works are being carried out illegally with violation of norms.

“As per the Ancient Monuments and Archaeological Sites and Remains (AMASR) Act, new construction work within the 100 metres of any historical site is prohibited. However, the Odisha Government is carrying out digging and construction works near the temple,” she had said.

Pull out of IPL 2022, for all you care: Ravi Shastri’s advice to struggling Virat Kohli