Army chief in Ladakh to review ops amid tension with China 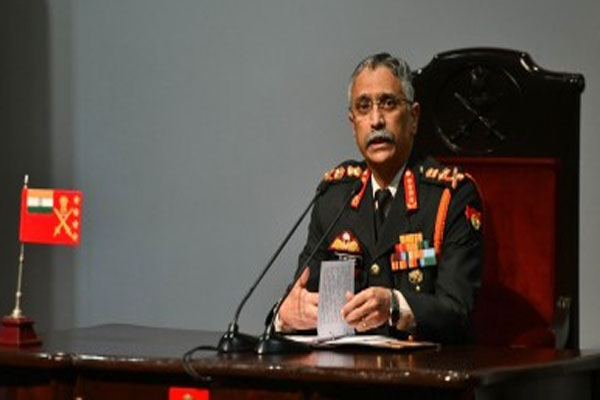 New Delhi:  Indian Army chief General Manoj Mukund Naravane is on a two-day visit to Ladakh to review operational preparedness of the force amid border tension with China.

General Naravane reached Leh early Thursday and interacted with senior officers present. His visit to forward location was expected, said source in the forces. The Army chief would be discussing strategy over how to thwart Chinese incursion attempts.

Chinese’s People Liberation Army (PLA) troops have made fresh incursion attempts into India territories. Both the countries military representatives are now engaged in dialogue to de-escalate the tension. China made provocative military movements to change the status quo at Pangong Tso.

On August 31, Chinese troops indulged in provocative actions despite Indian soldiers earlier occupying the heights to thwart the PLA’s land-grabbing bid over the weekend. On the intervening night of August 29 and August 30, PLA troops violated previous consensus agreed in military and diplomatic engagements during the ongoing standoff in eastern Ladakh and tried change the status quo.

Naravane would also be reviewing the formidable logistical challenges posed by harsh climate at heights exceeding 12,000 feet and temperature as extreme as minus 50 degrees Celsius as winter approaches. The force requires special clothing, diet and shelter for around 35,000 extra troops deployed in Eastern Ladakh. Most of the friction points in Ladakh like Pangong Lake and Galwan Valley where the face-offs have happened are 14,000 feet above the sea level.

Both countries have been engaged in the current four-month-long standoff at the Line of Actual Control in eastern Ladakh. Despite several levels of dialogue, there has not been any breakthrough and the deadlock continues.

On June 15, as many as 20 Indian soldiers and an unknown number of Chinese troops were killed in a violent clash in the Galwan Valley.

Chinese aggression started increasing along the LAC and more particularly in Galwan Valley since May 5. The Chinese side transgressed in the areas of Kugrang Nala, Gogra and north bank of Pangong lake on May 17 and 18.