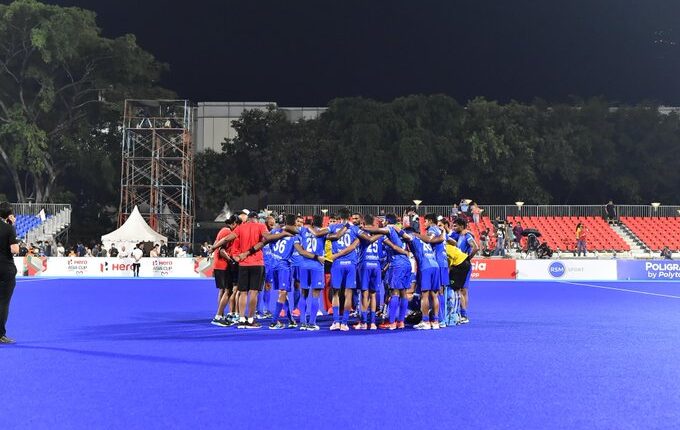 Jakarta: India fought back brilliantly from a two-goal deficit to take a 3-2 lead before a goal five minutes before the end of the match, helped Malaysia hold the defending champions 3-3 in a Super 4s pool game in the Asia Cup hockey tournament here on Sunday.

The Indians, played poorly in the first half, were totally defensive and could not produce a single shot a the Malaysia goal. Malaysia capitalised on the passive play by the Indians and scored once in the first two quarters through penalty corner expert Razie Rahim to take 2-0 lead.

The young Indian team came back strongly in the second half, launched some superb attacks, controlled the midfield and defended well to score thrice through Visnhukant Singh (31st min), SV Sunil (52nd) and Nilam Sanjeep Xess (54th) minute to take 3-2 lead. Razie Rahim completed a well-deserved hat-trick when he converted another penalty corner to make it 3-3 five minutes before the end of the match.

The draw put India on par with Korea at the top of the standings with four points each from a win and a draw. Malaysia are third with two points from two draws while Japan are at the bottom of the Super 4s table after two losses.

India fought back brilliantly after going down 2-0 in a first half in which they failed to have a single shot at the Malaysian goal, did not earn a single penalty corner despite enjoying a slightly better ball possession.

The defenders conceded three easy penalty corners and Malaysian drag-flicker Rahim Razie capitalised on two of them to put his team ahead.

The Malaysians scored once each in the two quarters — Rahim scoring the goals in identical fashion, flicking low to the right of goalkeeper Suraj Karkera.

The Indian coach Sardar Singh changed his goalkeeper, bringing in Pankaj Rajak. The tongue lashing by the coach in the half-time break seems to work wonders as the Indians came back superbly and pulled one goal back within seconds of the restart.

On a counter-attack, after Malaysia were thwarted by goalie Rajak, India earned their first penalty corner of the match and scored when Vishnukant Singh scored off a rebound after goalkeeper Othman Hafizuddin had blocked Nilam Sanjeep Xess’ superb drag-flick.

Malaysia created a couple of good chances but were thwarted by the Indian defenders but India continued to play attacking hockey and wrested the initiative back from Malaysia.

They had a chance to equaliser when SV Sunil and Uttam Singh combined after the latter had stolen the ball from a Malaysian player. But Sunil was fouled and India earned their second penalty corner. Sunil’s shot off an indirect variation was cleared by the goalkeeper. Just before the end of the third quarter, goalkeeper Rajak thwarted Malaysian forward Saari’s attempt at goal.

The end-to-end action continued in the third quarter too as India came out attacking once again and made it 2-2 in the 52nd minute when Pawan Rajbhar set up SV Sunil with a brilliant run after dispossessing a Malaysian midfielder. Sunil struck home with a powerful shot from an acute angle to pull India back into the match.

And two minutes later, the Indians were celebrating once again, this time for taking a 3-2 lead as Nilam Sanjeep Xess converted a penalty corner with a superb drag-flick in between goalkeeper Hafizuddin and a defender.

But India’s happiness was short-lived as Rahim completed his hat-trick in the 55th minute by converting their fifth penalty corner to make it 3-3.

Though India played the last two minutes with 10-men as Mandeep Singh was out with a green card, they managed to hold on to the position and gain one point from the match.