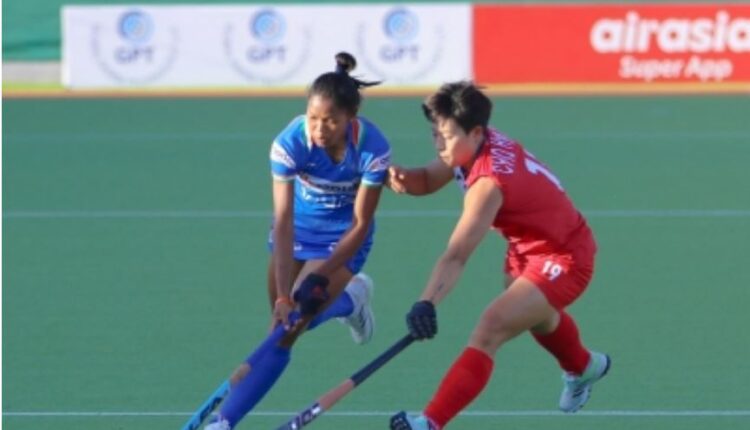 Muscat: The India women’s hockey team lost 2-3 against Korea in the first semi-final of the Asian Cup here on Wednesday. Neha (28′) and Lalremsiami (54′) scored the two goals for India in the match, while Eunbi Cheon (31′), Seung Ju Lee (45′), and Hyejin Cho (47′) scored the three goals for Korea.

Team India started the match on the front foot, penetrating inside the Korean circle and troubling their defence. A challenge on Vandana Katariya in the 3rd minute of the match earned the defending Champions an early penalty corner but the Korean defence was up to the task of defending it. Korea struggled to get deep inside India’s half with India’s midfield doing excellent work to keep them at bay. In the 12th minute, a long pass inside the circle from Navjot Kaur landed right below Monika’s stick, who passed it to Mariana Kujur and she crossed it to Lalremsiami, who nicked into the back of the nets. But the goal was ruled out, and the scoreline remained 0-0 at the end of the first quarter.

India continued their attacking display at the start of the 2nd quarter, getting inside the circle in the 16th minute to shake up the Korean defence. Korea goalkeeper stepped up to clear the danger, but India’s continued penetrating runs continued to put Korea on the back foot. In the 20th minute, India captain Savita faced her first real test of the match with Korea receiving back-to-back penalty corners.

But the India goalkeeper stood tall and strong to defy the opposition. With a minute left in the Q2, India received back-to-back penalty corners. Neha received the ball after a deflection from Korean defenders, and she struck the ball inside the nets to give her team the first goal in the 28th minute as India went into the Half Time with a 1-0 lead.

Korea bounced back early on in the third quarter from an early Penalty Corner. Despite Savita’s solid save, Korea Captain Eunbi Cheon managed to hit the ball inside the nets to equalise the score in the 31st minute. Team India worked hard to regain their lead but the Korean defence managed to keep the danger at bay. A fantastic move from the right flank led to India receiving another Penalty Corner in the 42nd minute.

But the dragflick from Gurjit Kaur struck the goalpost and deflected away. In the final minute of the Q3, Seung Ju Lee made a quick run into India’s circle from the left and hit the ball into the bottom right end of the nets to give her team a 2-1 lead before the final quarter.

Korea started with confidence in the fourth quarter and Hyejin Cho got another goal in the 47th minute to further exceed her team’s lead to 3-1. With Vandana Katariya, Lalremsiami making dangerous penetrating runs inside the opposition’s circle, the Korean defence continued to remain under pressure despite a two-goal lead. Lalremsiami got a goal back in the 54th minute of the match to make it 2-3 for India. Korea kept possession in the final minutes of the match to prevent India from getting the equaliser. Despite a strong fight from India, Korea came out with a 3-2 win in the thrilling contest.

The Indian Women’s Hockey team will face off against either Japan or China in the 3rd/4th place Match of the Women’s Asia Cup 2022 on Friday.