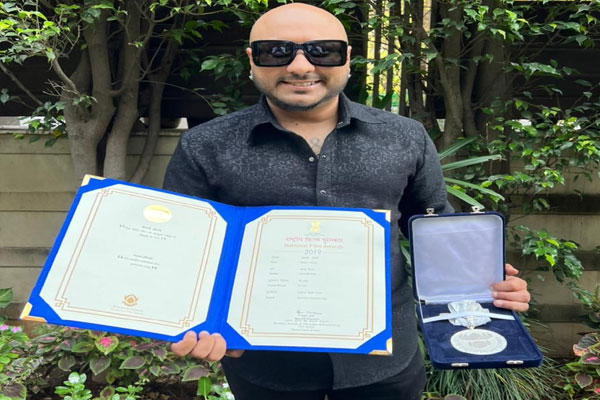 Mumbai: B Praak won the coveted title for the Best Male Playback Singer for his song ‘Teri Mitti’ at the 67th National Film Awards. While it is a surreal moment for him, it is also overwhelming as he finds himself in the company of his fellow winners.

The singer spoke about his big win as he said, “It has been a year full of things to be grateful for. But of all the highlights, this award shines brightest. I am so overwhelmed. It’s a surreal moment for me and I feel so blessed that we as a team created a song that resonated with a nation in such a strong way.”

He adds that this moment will be etched forever in his heart, “Today will always remain a precious day in my career. Every artist wants to be valued and there cannot be a greater honour than the National Award.”

B Praak’s song, ‘Teri Mitti’ gave the nation a lump in the throat as it made everyone feel for the fallen heroes and their supreme sacrifice in the line of duty. The song composed by Arko with lyrics penned by Manoj Muntashir was the highlight of the 2019 war film ‘Kesari’.

While the 67th National Film Awards were announced in March 2021, they were concluded recently as they honoured and celebrated the brilliance in our cinema. In addition to B Praak, some of the biggest film artists like Manoj Bajpayee, Rajinikanth, Dhanush, Kangana Ranaut and Vijay Sethupathi received the honours for their work and excellence in Indian cinema.