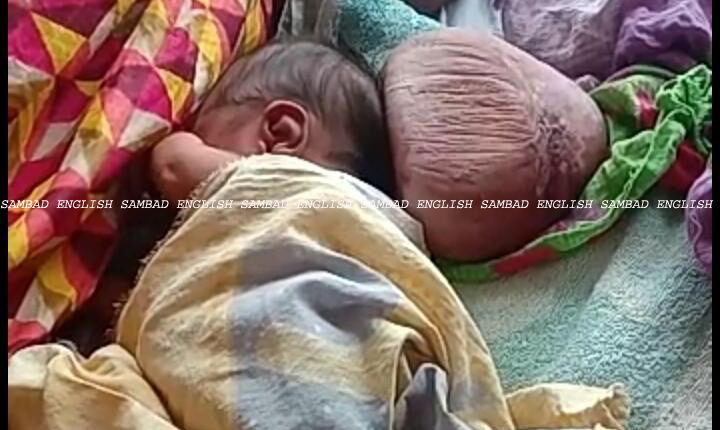 Balasore: A rare congenital defect has been found in a newborn as a woman gave birth to a baby with two heads here. The baby girl was born with this abnormal condition on Saturday midnight at the District Headquarters Hospital (DHH) here.

The following day, the doctors referred the newborn to Sardar Vallabhbhai Patel Post Graduate Institute of Paediatrics (Sishubhawan), Cuttack for better treatment. The doctors at the government-run premier childcare hospital were of the view that surgical removal of the second head was not possible considering the age (a day old) of the patient.

The parents – Sudarsan and Subasini Jena from Madhupur village under Nidhipanda here – returned back to the hospital where the child was born the same day (Sunday afternoon).

The doctors at the DHH also echoed the views of their counterparts in Cuttack and asked them to be patient until the child gets older by a few years.

“Surgery on the three-day-old child is not possible now. As the surgery is complicated and risky, it is advised against surgical intervention at this time. The child is receiving treatment in the in-patient facility,” said Balasore CDMO Banerjee Prasad Chhotray.

The child, meanwhile, has developed complications wherein the left side of her face has swelled.

“The doctors are not treating our child properly. The left eye has bulged due to excessive swelling. The baby must be experiencing pain and discomfort. We demand proper treatment of our baby,” the parents of the newborn expressed.

Doctors opine that cases of encephalocele (cranium bifidum) are most likely caused by the mother’s age and malnutrition.

Worth mentioning, it’s a rare condition that arises when a baby’s skull doesn’t close properly during pregnancy, and parts of the brain or the membrane that covers it form outside the skull in a ‘second head’.

The rare condition of the child has now become the talk of the town.

Brown sugar worth Rs 25 lakh seized in Odisha capital; 29-YO…