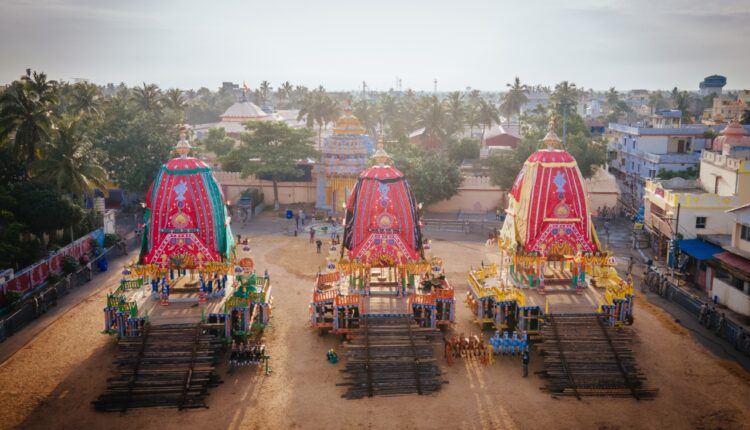 Puri: The Bahuda Jatra of Lord Jagannath, Lord Balabhadra and Devi Subhadra, which marks the return journey of the deities from their aunt’s place Gundicha Temple to Srimandir, is being held in Odisha’s Puri today sans devotees due to the COVID-19 situation.

On the day of Bahuda Jatra, deities are taken to their respective chariots from the Gundicha Temple in a ceremonial procession namely ‘Bahuda Pahandi’.

After the deities are placed on the chariots, ‘Chhera Pahanra’ ritual is performed by Gajapati Maharaja of Puri on the three chariots. It is followed by pulling of chariots towards the Srimandir.

On the way back, the chariots halt for a while at the Ardhasini Temple, also known as Mausi Maa Temple, where ‘poda pitha’ is offered to the deities.

Before reaching the Srimandir, Lord Jagannath’s chariot also halts in front of the palace of Gajapati Maharaja of Puri, where a ritual namely ‘Lakshmi-Narayana Bheta’ is held.

In view of the Covid-19 pandemic, restrictions have been imposed in the pilgrim town of Puri for the smooth conduct of Bahuda Jatra, this year.

Prohibitory order under Section 144 will be in force in Puri till 8 PM of July 21 to ensure that no devotees are on the Grand Road at the time of the Bahuda Jatra.