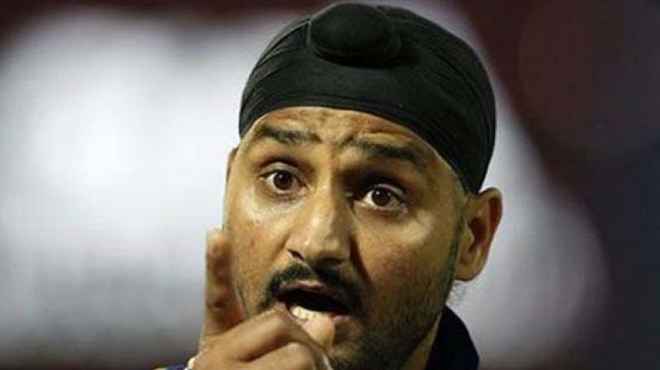 Veteran cricketer Harbhajan Singh on Wednesday lashed out at a Jet Airways pilot for racial discrimination against a fellow Indian passenger.

The Punjab tweaker, who is currently playing for the Indian Premier League (IPL) side Mumbai Indians, took to Twitter to reveal that the pilot, named Bernd Hoesslin, “physically assaulted a lady and abused a physically challenged man” besides calling them “bloody Indians”.

In a series of tweets, the off-spinner, popularly known as the ‘Turbanator’ hit out at the airline’s pilot for disrespecting an Indian despite himself making his living on Indian soil.

“So called this Bernd Hoesslin a pilot with @jetairways called my fellow indian (u bloody indian get out of my flight) while he is earning here,” Harbhajan wrote in his first tweet.

“Not only was he racist but physically assaulted a lady and abused a physically challenged man…absolutely disgraceful & shame on @jetairways.”

Demanding strict action against the pilot, the 36-year-old cricketer wrote: “Strict action must be taken & such things should not be allowed or tolerated in r country… #proudtobeindian let’s get together and sort this.”

Talking to the media on Wednesday, the veteran off-spinner urged the airline to take strict action against the errant pilot.

“A friend of my wife told her about this. His behaviour was totally racist. He (the pilot) is no one to tell us who we are and what we do. He is earning in our country. He cannot tell us what he feels whatsoever,” the cricketer told India Today.

“My friend tried talking to Jet Airways. They all heard what the pilot said. But no action has been taken against the pilot so far. He has no right to abuse us,” he added.

Harbhajan was reacting to an incident involving Punjabi and Bollywood music director Jatinder Shah and Bollywood marketing professional Pooja Singh Gujral during the flight from Chandigarh to Mumbai on April 3.

“Extremely shocking n upsetting incident with Jet airways ! Travelled chandigarh-mumbai over the weekend. On arrival a close friend’s customised wheel chair that was checked in as per jet regulations did not reach him. The flight was already delayed because of the airlines internal issues. He was made to wait and i decided to wait along with him,” Pooja posted on her Facebook account.

“Meanwhile the captain of the aircraft ‘Bernd Hoesslin’ came and started behaving nasty and screaming for checking in his personal wheelchair. I intervened and told him that it is allowed and various times this wheelchair was checked in earlier aswell! Plus #jetairways had checked it in at chandigarh so it was allowed! He got really mad at me and started screaming and pushed my hand saying ‘GET OUT’ ! I moved him aside and warned him not to touch me ! He said ‘u bloody indian’ and thats when i gave him hell,” she added.

A complaint was lodged on April 4 at the Sahar International Airport police station, and Jet Airways has agreed to give a written apology to the music director and his friend.

Meanwhile Jet Airways issued a statement apologising for the incident.

“Jet Airways has zero tolerance towards any action of our employees that contravene local or international laws. Additionally we have a strict employee code of conduct which is based on the values and ethos of the airline.This is clearly mentioned in the prescribed service condition of the employees and is adequately emphasised during international training sessions.

“All airline employees are required to comply with the company’s rules and regulations and with the customs and security laws of the countries that Jet Airways flies to,” the statement said.

“Corrective action will be taken as per company policy and after due investigation. As regards to this incident, Jet Airways has noted guest feedback with concern and regret that incident.

“The airline has initiated an investigation based on inputs from guest concerned, departments and agencies,” it added. (IANS)

Sujal Kahar to represent India in F4F championship in Russia

Virat, Anushka donate Rs 5 lakh each for welfare of Mumbai…