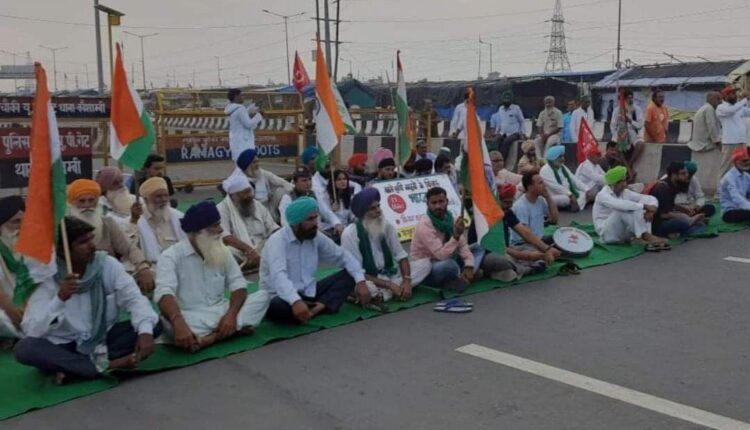 New Delhi: Vehicular movement between Delhi and Uttar Pradesh was severely affected as agitating farmers blocked Delhi-Meerut Expressway near the Ghazipur protest site during the Bharat Bandh observed by them, today.

The security arrangements across the peripheries of the national capital were beefed up in the wake Bharat Bandh on Monday to mark one year of the passage of the Centre’s three contentious farm laws.

Farmers’ umbrella body, the Samyukt Kisan Morcha, had given a call for the Bharat Bandh, saying that their “historic Struggle” to repeal the farm laws completes 10 months on this day.

From 6 a.m. to 4 p.m., everything would be closed throughout the country be it government and private offices, all educational and other institutions, all shops, industries and commercial establishments, all public events and functions would be shut.

The SKM had said public and private transport shall also come to a halt during this period, however, as per initial reports, public transport, including the Delhi Metro, were seen functional.

A senior police official said that they have beefed up security close to all the three border points — Tikri, Singhu and Shambhu — where farmers have been protesting for the past 10 months.

“There is an adequate number of police personnel on the ground and we are fully alert,” the official said.

The police force is seen more careful this time keeping in view how the January 26 Red Fort events unfolded into serious violence.

On January 26, thousands of farmers protesting against the agriculture reform laws breached the security cordons at the borders and entered the national capital in a failed attempt to reach the historic Rajpath for their tractor march.

However, hundreds of protesters managed to enter the Red Fort breaching police security, and planted a religious and farm union flag on the pole where Tricolour is hoisted on Independence Day.

The flag was later removed and the area cleared by the police.

Meanwhile, a Delhi Traffic official said the traffic movement was closed from Uttar Pradesh towards the Ghazipur border due to the protest.

Farmers, in large numbers, could be seen sitting on the road and raising slogans against the farm laws.