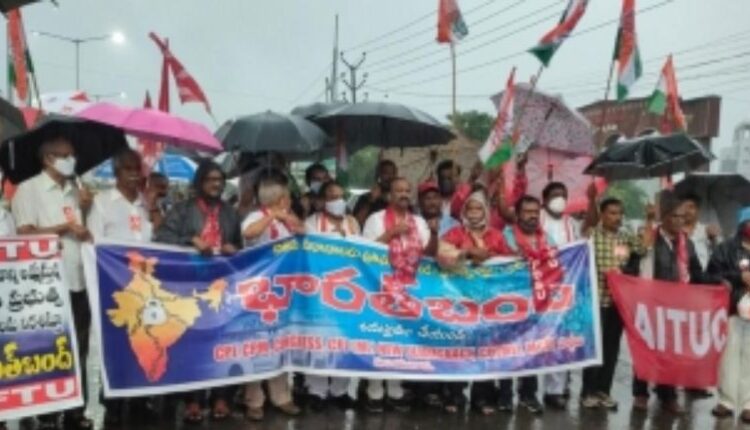 While normal life was affected in Andhra Pradesh with the ruling YSR Congress Party (YSRCP) supporting the shutdown call, the bandh had partial impact in Telangana where ruling Telangana Rashtra Samithi (TRS) distanced itself from the protest.

Government offices in Andhra Pradesh remained closed and buses of state-owned Andhra Pradesh State Road Transport Corporation (APSRTC) went off roads. Shops were also closed in parts of the state in response to the bandh call demanding the repeal of new agricultural laws.

APSRTC has announced that bus will not ply till afternoon. The government offices will also reopen in the afternoon.

Leaders and workers of non-BJP parties, trade unions and people’s organizations staged protests across Andhra Pradesh in support of the demand of farmers. They organised rail rook, road blockade and took out rallies protesting the anti-people policies of the BJP-led government at the Centre.

APSRTC buses were confined to depots in all 13 districts of Andhra Pradesh. Workers of various parties supporting the bandh staged sit-in in front of bus depots since early morning.

The bandh impact was also seen in Paderu agency area of Visakhapatnam district. Employees of Visakhapatnam Steel Plant also participated in the strike demanding the central government to drop its plans to privatise the public sector undertaking.

Despite rains, leaders and workers belonging to CPI, CPI-M, Congress, CPI (ML) New Democracy and other parties staged the protest in Amaravati. Workers of main opposition Telugu Desam Party (TDP) also hit roads at various places in the state to participate in the protests.

The Bandh call evoked only a partial response. With TRS staying away from bandh, there was not much impact on normal life. Though a section of TSRTC employees supported the shutdown call, the transport body operated normal services.

Leaders of Congress, Left parties and other groups staged road blockades at various places in the state. Raising slogans against the Centre’s policies and hike in petrol and diesel prices, the protestors took out rallies and staged dharnas.

Congress legislators were detained by the police when they tried to reach Telangana Assembly on a horse carriage to lodge their protest over steep hike in fuel prices. Police stopped them, leading to an argument. The police later detained Congress Legislature Party leader Mallu Bhatti Vikramarka and legislators Sreedhar Babu, Jeevan Reddy and others.

Leaders of Left parties, Congress and others were participating in road blockade at Uppal crossroads in Hyderabad.