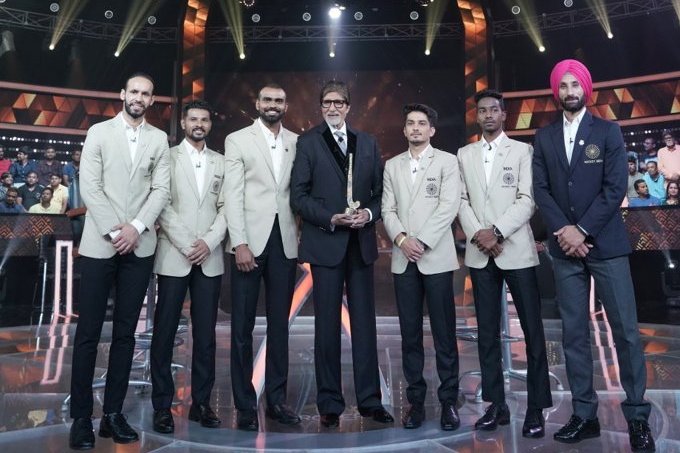 Mumbai: Megastar Amitabh Bachchan says sports is the identity of a nation and sportsmen are the brand ambassadors. Amitabh on Monday night shared a photograph of himself along with the players of the Indian hockey team from the sets of “Kaun Banega Crorepati”.

He captioned the image: “Honouring the Indian hockey team on KBC Karmveer episode. Their dedication, their effort for the country is beyond compare. Jab hum apne desh ki khiladiyon ko sammanit karte hai to hum desh ko bhi sammanit karte hai. Desh ka gaurav hai yeh, tirangey ki shaan aur maan hai yeh. (When we honour our country’s sportsmen, we honour the nation. They are the pride of the nation. They are the pride and glory of the flag).”

The 75-year-old actor took to his blog and wrote: “Sport is the identity of a nation .. when we excel in a routine the World takes notice. Sportsmen are a nations brand ambassadors… for merit for glory for the recognition that we are blessed with.

The “Piku” star then sought support for the Indian men’s hockey team for the World Cup, which will be taking place in Odisha in November and December.

“Our mens hockey team taking on in a month, the challenge of the World Cup to be held in Odisha in November. our pride our heroes. They need our support and encouragement. Come in large numbers to cheer for them in Bhubaneswar, Odisha.

“The cheers that surround the playing field is the adrenalin that players need for achieving victory,” he added.

On the acting front, Amitabh is gearing up for the release of his upcoming film “Thugs Of Hindostan”. It also stars superstar Aamir Khan, Katrina Kaif and Fatima Sana Sheikh.