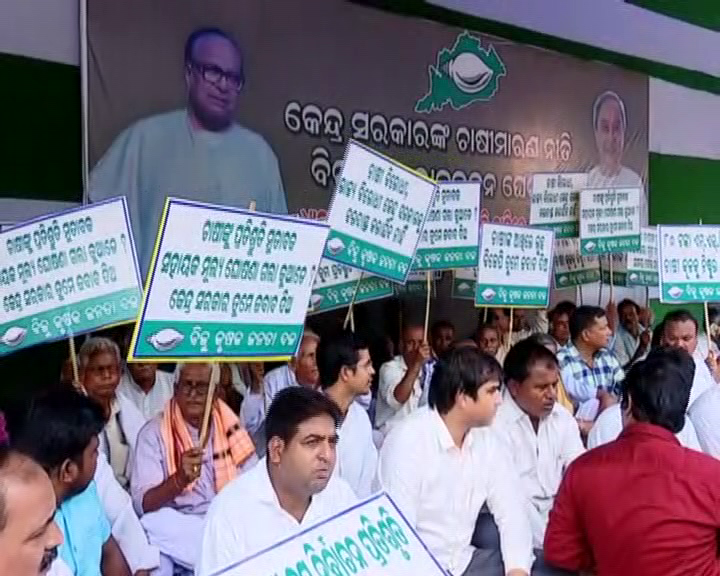 Bhubaneswar: The Biju Krushak Sammukhya (BKS)-the farmers’ front of the Biju Janata Dal (BJD) today staged a demonstration in front of the Raj Bhawan in the Odisha capital to protest against the Centre’s announcement of a mere Rs 80 hike in the Minimum Support Price (MSP) of paddy.

Later, a delegation of the activists comprising of Agriculture Minister Damodar Rout, Convenor of BKS Sushant Singh and several MPs of BJD met Governor S C Jamir and submitted a memorandum addressed to the President of India highlighting anti-farmer policies of the Centre.

In its memorandum, BKS has strongly protested against the anti-farmer policies of the Central government.

Further, BKS has said in the memorandum that the BJP’s pre-election promise to double the MSP of paddy was mere hogwash.

It may be recalled here that the Odisha Assembly in its last session had adopted a unanimous resolution to put forth a demand before the Centre to raise MSP of paddy to Rs 2,930 per quintal and a House Committee led by the Speaker had sought an appointment with Prime Minister Narendra Modi to submit its memorandum.

However, the House Committee is yet to get an appointment from the Prime Minister’s office.

On the other hand, the Bharatiya Janata Party (BJP)’s Krushak Morcha staged demonstrations at Collector offices in all districts demanding waiver of farm loans in the state. The Morcha submitted memorandums addressed to the Governor through the Collectors.