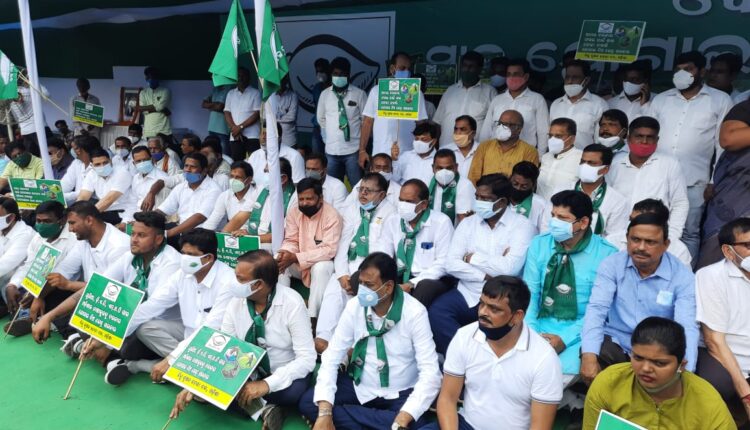 Bhubaneswar: Several Biju Janata Dal (BJD) leaders and workers today staged protest near the Raj Bhawan here alleging short supply of fertilizers by the Central Government. The agitators also submitted a memorandum to the Governor in this regard.

BJD leader Sanjay Kumar Das Burma, who led the protest, said that Odisha farmers have cultivated paddy and non-paddy crops on 61.96 lakh hectares of land, this year. An Agreed Action Plan was finalised between the Central Government and the State Government, under which the former should provide fertilizers to the farmers within a fixed period of time. However, the Centre has not done so. It is unfortunate that there is no fertilizer supply during the ongoing Kharif marketing season, he said.

However, the Bharatiya Janata Party (BJP) has refuted the allegation. “There is no scarcity of fertilizers. The State Government has created an artificial scarcity to defame the Centre. Fertilizers are being sold to non-farmers at higher rates in the state, for which the genuine farmers are suffering,” said BJP leader Nauri Nayak.