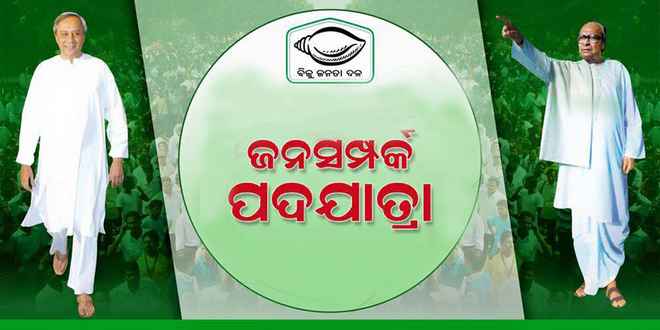 The ruling Biju Janata Dal today launched its Jansampark Padyatra to sensitise people about the welfare programmes launched by the Odisha government.

Chief Minister and BJD supremo Naveen Patnaik launched the annual peoples’ contact programme Nuagaon under Samantarapur area here at around 10.30 am in the presence of several party leaders.

“Our Padyatra programme for one month has begun so well today. These padyatras are to inform the people about government’s welfare programmes and also about central government’s neglect, particularly the river Mahanadi and Polavaram issues,” Chief Minister Naveen Patnaik said.

Earlier, BJD organized a 10-day Jansampark Padyatra beginning from October 2 coinciding with Gandhi Jayanti to Jayaprakash Narayan Jayanti on October 11 every year. However, it has announced to observe it throughout the month this year.

With panchayat elections due early next year, the BJD is aiming to take political mileage out of the padyatra.

On the other hand, Sambalpur MLA Raseswari Panigrahi launched the programme from Gandhi temple in her constituency where several leaders of the party participated in it.

The party would reach-out to people at block and panchayat level across the state. For this, as many as 147 observers have been appointed.

Sharif refused to condemn Uri attack despite US, UK prodding