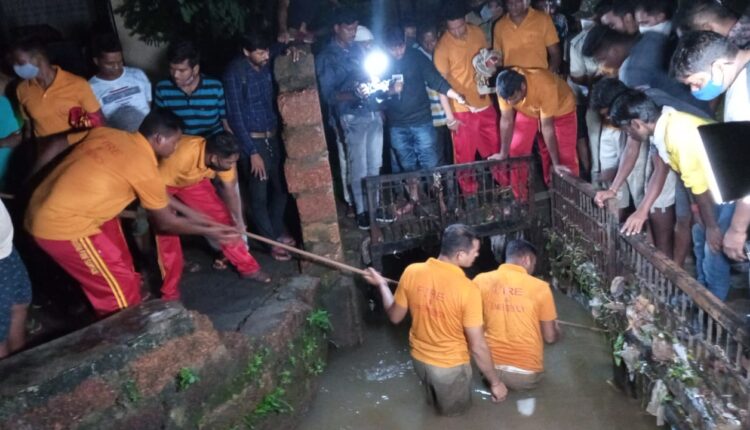 Bhubaneswar: Even considerable hours have passed, a 15-year-old boy, who was swept away in a swollen open drain in Bhubaneswar, was to be rescued by Fire Service personnel today. Following the mishap this afternoon, the Opposition BJP and Congress have trained guns on the State government.

As soon as the news of the boy, Jyotirmaya Behera from the city being swept away in the open drain broke out, members of Chhatra Congress along with Jatni MLA Suresh Kumar Routray staged a dharna on Shatbadi Nagar road in the city where the mishap allegedly occurred.

Accusing Naveen Patnaik-led state government of being negligent and corrupt, the Jatni MLA asked where the money announced by the Chief Minister in 2019 for drainage repair and work in the city have been spent.

Routray further alleged drains in many parts of the city have been left open leading to mishaps quite often. Despite announcements by the Chief Minister on several occasions, no development of drains has been done in the city, he stated.

Worth mentioning, the Chief Minister had announced a Rs 1,000-crore plan in March 2019 for development of drains in the Odisha Capital.

A Chhatra Congress leader said it seems the State government does not have any thought for the people of the city. This is not a remote area of the State but the Odisha Capital where drowning mishaps are occurring due to negligent of the authorities.

Had the work had been done properly such mishaps would not have happened, the Chhatra Congress leader rued.

President of the BJP’s Bhubaneswar Organisational District, Babu Singh lodged a complaint at the Khandagiri Police Station against Bhubaneswar Municipal Commissioner Sanjay Singh over the incident.

Alleging due to the negligence of the Bhubaneswar Municipal Corporation and the State government the mishap occurred, the BJP’s Bhubaneswar unit announced it will stage dharna in front to the BMC office at Kalpana in the city at 11 AM on September 20.

Jyotirmaya was swept away in a flooded open drain in Lane 7 of Shatbadi Nagar area after a brief hours of rain. Riding a bicycle he was going to the coaching centre. However, he accidentally fell into the open drain and went missing in the drain.

Till the filing this report, Fire Service personnel, who have been carrying out the rescue operation, were yet to trace him.

This mishap is not a lone such case in Bhubaneswar as in 2015, a nine-year-old boy died after being swept into a drain at Behera Sahi under Nayapalli police limits in Bhubaneswar.

While returning home from tuition, the boy, Pupun Biswal, slipped into the drain which was overflowing after heavy rains in the city.