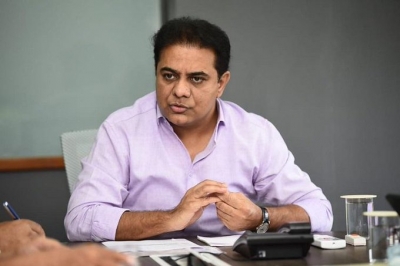 Reacting to reports that some Arab countries have demanded an apology from India for the blasphemous remarks made by spokespersons of the ruling party, Rama Rao said that it is the BJP that should apologise and not India.

In a tweet, Rama Rao asked Prime Minister Narendra Modi why should India as a country apologise to the international community for the hate speeches of BJP bigots. “It is BJP that should apologise; not India as a Nation Your party should first apologise to Indians at home for spewing & spreading hatred day in day out,” wrote KTR, as the TRS leader and state minister is popularly known.

“The tacit support from top is what emboldened the bigotry & hatred that will cause irreparable loss to India,” he added.

KTR tweeted on the issue for a second consecutive day. On Sunday, he had demanded the BJP to suspend its Telangana unit chief Bandi Sanjay Kumar.

“If the BJP truly respects all religions equally, should you also not suspend the Telangana BJP chief who made an open public statement wanting to dig up all the mosques & impose a ban on Urdu?,” he wrote

Bandi Sanjay, who is also an MP, made controversial statements in recent days. He alleged that Muslim rulers in Telangana demolished several temples and built mosques over them. He demanded digging work at all mosques, saying there was a possibility of finding Shiva Lingams underneath.