BJP wants Modi to head next government too 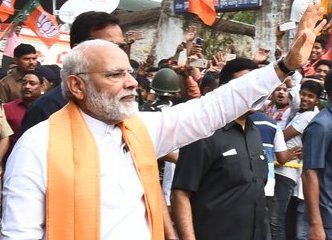 Hailing the NDA government for its pro-poor policies, the BJP on Sunday urged people to help Prime Minister Narendra Modi form the next government too – in 2019.

“The Prime Minister, in the last three years of his tenure with his hard work, has translated his words into action and confidence amongst the people,” said the political resolution passed at a two-day meeting of the National Executive.

“The BJP calls upon the people of our country to take a pledge to form a government under the leadership of Narendra Modi in 2019 in order to have the continuity of development and welfare policies for all,” it said.

The resolution also called upon party workers to take a pledge to work hard to win the confidence of the people.

“Our government’s people-oriented policies and firm decisions towards making India a self-reliant, self-confident and progressive nation have instilled faith and confidence amongst the common people towards the political leadership of the country.

“These policies and decisions have established India’s credibility on world forums as a fast growing and progressive nation. Our government has been diligently working towards fulfilling aspirations and expectations of all the downtrodden and marginalized sections,” the resolution said.

It said the majority of the schemes and policies launched by the central government were aimed at benefitting people at the bottom rung of the society.

“The poor have started feeling a sense of trust and belonging in the present government. This trust and faith in the minds and hearts of the millions of common people has been proved again in the mandate and overwhelming support given to the party in the last many elections,” the resolution said.

It applauded the government for making sincere efforts to get the GST bills passed in Parliament and achieving success in bringing a discipline in the budget so as to accelerate the economic activities in all sectors.

The resolution said the recent election results had made it clear that the BJP had established its reach across the country by gaining confidence of the people because of its policies of public welfare.

The resolution, however, made no mention of the BJP’s core issues like Ram Mandir, Article 370 and Uniform Civil Code. Even the issue of the ban on cow slaughter not discussed.

The resolution said under Modi India’s goodwill had increased globally.

“The world is now looking towards India. All major reports and analysis emanating from the developed world have started considering India as a land of prospects. India’s relations with all the countries in the world have improved. India’s credibility has also significantly increased in the trade, strategic and diplomatic forums. The only reason for this change is the fact that there is a strong government in the country.

“Modi’s style of working, his policies dedicated to public welfare, his strong will and the strong leadership and capability has been accepted and recognized at the global level,” it added. (IANS)