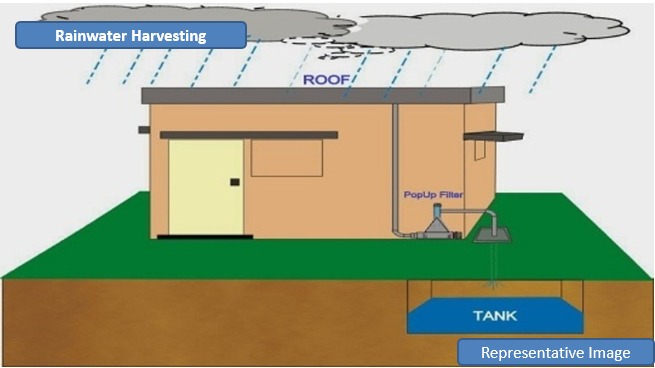 Bhubaneswar: The Bhubaneswar Development Authority (BDA) and Bhubaneswar Municipal Corporation (BMC) have set a deadline of six months for building owners to install Rain Water Harvesting (RWH) system or else, may face strict action as per the law. The RWH system is mandatory for buildings built on a minimum area of 300 Square metre under the jurisdiction of the BMC and BDA.

The BDA and BMC have decided to refuse to issue occupancy certificate in case an apartment developer or individual house owner does not follow the norms.

“In pursuance to the mandatory provisions of Rain Water Harvesting prescribed in BDA (Planning &Building Standards) Regulations and Section 302 of Odisha Municipal Corporation Act, 2003, all building owners, developers, Residents’ Welfare Associations, Government organisations, schools, colleges, universities, Large campuses, etc. within the area of Bhubaneswar Municipal Corporation are hereby directed that Rain Water Harvesting structures shall be installed within six months’ time from the date of this order,” said an order jointly issued by BDA and BMC.

“Strict enforcement measures shall be taken up after the stipulated time is over, under the provisions of Odisha Development Authorities Act, 1982 and Odisha Municipal Corporation Act, 2003. In case of non-compliance of order, appropriate action shall be taken under the provisions of aforesaid Acts and rules/regulations framed thereunder, which includes but not limited to revocation or permission/ revocation/suspension of occupancy certificate. All Government and private owners are requested to treat this is an opportunity to contribute in making of a climate resilient Bhubaneswar,” the order added.

The civic body further said: “To reduce the impact of urban flooding during heavy rainfall, it is one of the recognised mitigation measure, to construct rainwater harvesting structures by which the rainwater can be collected from the rooftops, paved and unpaved areas, parks/playground/parking areas, etc. and stored for either for re-use purpose or recharge of the stored rainwater into the ground.”

“A team from BDA and BMC will make surprise visits to various buildings in the city to check the violation of the rule. The authority will check whether these buildings have constructed the facility and if not, strict action will be taken against the building owners,” a Planning officer from BDA said.

Mandatory provisions have been prescribed in the BDA (Planning & Building Standards) Regulations, since 2008 for effective management of rainwater, which includes harvesting, storing, re-use and groundwater-recharging of rainwater within the premises and the Rain Water Harvesting structures shall be mandatorily provided in plots, which are more than 300 Square metre in area including open spaces and the provisions of the aforesaid regulations shall also be applicable to any building constructed without an approved plan and buildings constructed with deviation of an approved plan.

Rain harvesting structures are those that help store rainwater for re-use in in the same building or for other purposes. In 2015, the Odisha government had decided to implement a new scheme for rooftop rainwater harvesting and groundwater recharge in urban areas of the state, with an investment of Rs.100 crore.

On a pilot basis, it was implemented in Bhubaneswar through installation of Rooftop Rainwater Harvesting Systems (RRHS) in buildings to augment ground water recharge, enhance the water table and improve water quality in the urban areas of the state.

It came to light that RWH system remained poor in Bhubaneswar with only a handful of building owners complying with it despite repeated directives issued in this regard.