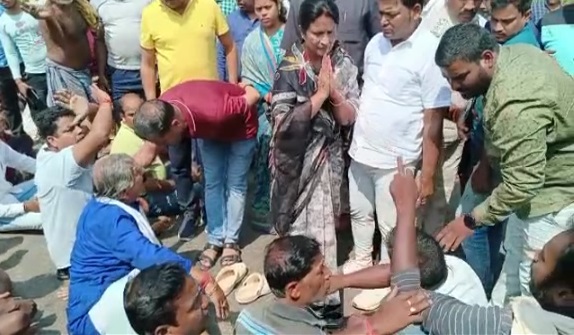 Bhubaneswar: The Bhubaneswar Municipal Corporation (BMC) today decided to put on hold the garbage dumping activity at Bhuasuni following a road mishap in which one villager was killed at Daruthenga area on Chandaka-Barang Road on outskirts of Bhubaneswar city.

The protestors called off the road blockade after Bhubaneswar Mayor Sulochana Das promised to provide Rs 5 lakh financial assistance and a contractual job to one member of the family of deceased.

The residents of Daruthenga village on city’s outskirt protested blocking the main road that connects Khordha and Cuttack after one villager died after being hit by a garbage-laden truck engaged by the BMC this morning.

Reports said that the garbage truck en route Bhuasuni dumping yard ran over a villager at Daruthenga area on Chandaka-Barang road while he was moving on his bicycle in the morning.

Following the incident, the locals staged the road blockade demanding intervention of the BMC authorities as well the collector to take steps for prevention of such mishap at the locality near Bhuasuni dumping yard.

Since this was the second mishap in last two months, the protestors threatened not to allow the garbage trucks into the dumping yard.