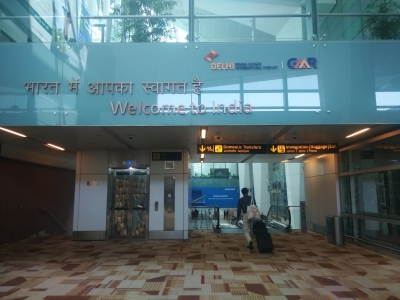 New Delhi: Situation at Indira Gandhi International Airport became chaotic after the Delhi Police received a PCR call about a bomb in a flight that was coming from Moscow. It was an international call that was made to the police.

The police said that they got the PCR call at around 11.15 p.m. that the flight which was coming from Moscow, and was scheduled to land at 3.20 a.m., had a bomb in it.

After receiving the call all the security agencies were put on standby the whole night.

“FLIGHT No SU 232 (Moscow to Delhi) landed at runway number 29. It was carrying 386 passengers and 16 crew members. All were safely evacuated. The plane was taken to a safe and was thoroughly checked. As of now no bomb was found,” the official said.

The police said that it was an international call which alerted them about the bomb.

They were still checking the baggage of the passengers.

Woman critical after husband stabs her on ‘Karwa Chauth’