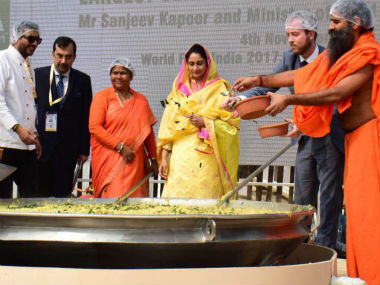 New Delhi: A team of 50 chefs in a government-led initiative on Saturday created a world record by cooking 918 kg “khichdi” live at the World Food India 2017 event here.

According to the organisers, their attempt to prepare Brand India khichdi using 800 kg of grains has entered the Guinness World Records.

Before the official announcement of the record, famous chef Sanjeev Kapoor, who led the team, said the khichdi preparation in the big “kadhai” (wok) using steam had started from Friday night and he was confident of the record.

Multi-grains such as rice, bajra, ans ragi, as well as pulses, vegetables and spices were used in the khichdi.

Yoga guru Baba Ramdev and Union Minister Harsimrat Kaur Badal were among those participating in the event and they added “tadka” to the India’s traditional staple food.