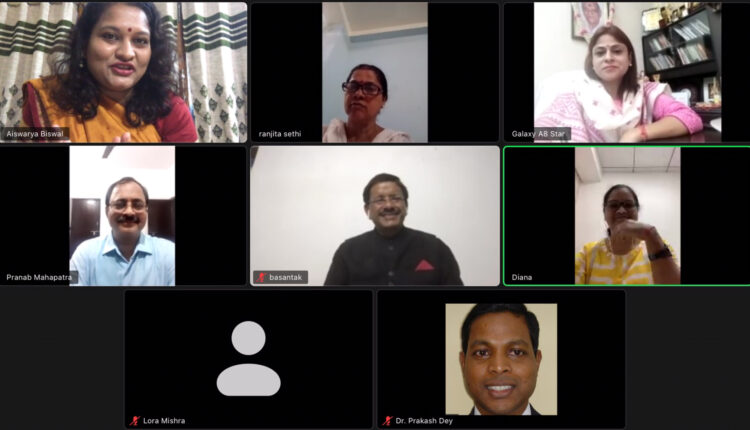 Share
Bhubaneswar: More then 8 lakh babies die across the globe every year due to lack of breastfeeding. According to World Health Organisation’s (WHO) report, nearly 1 lakh children die every year due to various diseases which could have been prevented by breastfeeding alone.
WHO has been focusing to promote breastfeeding and one of its initiatives is the celebration of ‘Breastfeeding Week’ in the first week of August. Under the leadership of Dr Aiswarya Biswal, to celebrate the breastfeeding week, a webinar was organised to promote breastfeeding and increase awareness and it’s immense benefits, especially to the mother and baby during the week.
It was an international webinar, where eminent professionals and pioneers of nutrition from both India and the UK joined as keynote speakers; they were Basant Kar, Harshita Pandey, Dr Pranab Mahapatra, Prof Lora Mishra, Diana Sahu, Dr Prakash Dey, Dr Sahadev Swain and Ranjita Sethi.
In the webinar, the keynote speakers did highlight that mother’s milk is the first food as well as the best source of nourishment for the baby. Also elaborate emphasis was given on the numerous breastfeeding models for Aatmanirbhar Poshan in India, (self reliant nutrition).
India needs to scale up and replicate home growing indigenous models like Surguja (district of Chhattisgarh) for a larger impact. Humongous success story of Surguja model is an inspiration to all, where local level leaders and members of civil society were involved in spreading awareness about breastfeeding, even their panchayat sabha started an exclusive meeting known as ‘Poshan Panchayat’, aimed to focus on nutrition. Due to this proactiveness, more women started to breastfeed their babies and according to National Family Health Survey 4, around 87.5 % of mothers were breast feeding their babies in Surjuga, where as national average is less then 50%.
Related Posts

The harmful effects of feeding of formula milk and ultra processed food was discussed, where the professionals agreed that strict enforcement of breast milk substitute Act should be followed.
Panelist while praising the positive role of media in promoting and propagating the benefits of breast feeding in the society also stressed that media can act as free enhancer in spreading the awareness about breast feeding in the community.
During Covid-19 pandemic more stress should be given to breast feeding as mother’s milk  provides the immunity to the baby to combat with viral infection.
The bond between a mother and child is celebrated not only in India but also is one of the strongest emotional bonds all over the world. Breastfeeding further strengthens the bond between a mother and child. Various clinical studies emphasise that the baby develops better cognizance and social – emotional levels in their adult life, if they were fed mother’s milk.
In Odisha, a-third of the babies are deprived of breastfeeding due to various reasons.
Breastfeeding is quintessential for the holistic growth and development of the baby. The new born babies are only dependent on mother’s milk at least for the first six months as their digestive tracts are not fully developed. Mother’s milk contains all the essential nutrients including the macro and micro nutrients that is essential for the growth and development of the baby. Mother’s milk has the required levels of antibodies, which will prepare the new born’s  body to protect it from various infections, reduce the chances of obesity, and also protect from non communicable diseases. It protects the babies from diarrhoea and pneumonia, which are major ailments responsible for infant mortality and also helps to promote the well being of mothers by preventing them from the dire effects of ovarian and breast cancer according to UNICEF reports.
Breast feeding is inherently linked to mothers overall wellbeing such as intake of nutritious food containing adequate proteins, mineral and vitamins, which is unfortunately not available to the majority of Indian women mostly so in rural areas due to abject poverty and probably also due to lack of awareness, and education among families, the experts expressed.
Awareness and promotion of breast feeding can amplify in achieving the nutritional targets for the baby and the mother. India can show the world as an exemplary country on addressing malnutrition and achieving breast feeding targets as enshrined in Poshan Abhiyaan and United Nations Sustainable Developmental Goal targets, the panelists opined.
Share FacebookTwitterGoogle+WhatsAppTelegramEmail