ENTERTAINMENTINDIA & BEYOND
Sambad English Bureau Published On : Jun 1, 2022 at 1:27 PM 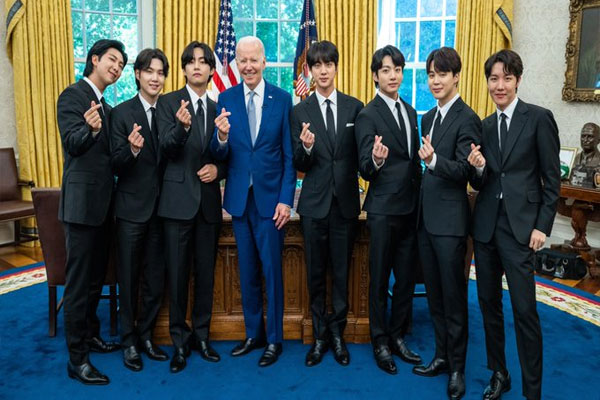 Los Angeles: For the final day of Asian American and Pacific Islanders Heritage, K-pop supergroup BTS stopped by the White House on Tuesday to speak with US President Joe Biden about Asian inclusion and representation.

Press Secretary Karine Jean-Pierre introduced the group and RM kicked off the press conference in English by introducing themselves and thanking the White House and Biden for the opportunity to speak on “the important issues of anti-Asian hate crimes, Asian inclusion and diversity,” reports ‘Variety’.

Then, each of the guys took turns speaking in Korean with Jin and Jimin expressing how honoured they were to be standing for their community at the White House on the last day of AAPI Month.

Jimin said: “We were devastated by the recent surge of hate crimes�to put a stop to this and support the cause, we’d like to take this opportunity to (lend our voices).”

J Hope added: “We are here today thanks to our Army – our fans worldwide – who have different nationalities and cultures and use different languages. We are truly and always grateful.”

Jungkook concluded their speech by sharing that the band was “still surprised that music created by South Korean artists reaches so many people around the world… we believe music is always an amazing and wonderful unifier of all things.”

Suga also added, “It’s not wrong to be different, equality begins when we open up and embrace all of our differences.”

V said: “We hope today is one step forward to respecting and understanding each and everyone as a valuable person.”

In total, over a quarter-million people tuned in to see the band speak on the White House’s YouTube livestream.

Amid last year’s spike of anti-Asian hate crimes in the US, BTS spoke out about their own experience with discrimination via Twitter saying: “We cannot put into words the pain of becoming the subject of hatred and violence for such a reason. Our own experiences are inconsequential compared to the events that have occurred over the past few weeks. But these experiences were enough to make us feel powerless and chip away our self-esteem.”

In May of 2021, Biden signed a bipartisan bill geared at addressing the rise in anti-Asian hate crimes into law in May 2021. The bill was introduced to aid the reporting of hate crimes, making them more easily accessible at the local and state levels by boosting public outreach.

As a part of this year’s AANHPI Heritage Month, Biden issued a proclamation late last month about the contributions of Asian Americans, Native Hawaiians, and Pacific Islanders to the country’s history and culture.

He and Vice President Kamala Harris – who is half Indian – also hosted a White House reception earlier in the month that included US Trade Representative Katherine Tai.

Two days later, the White House lauded the passage of legislation to establish a commission to study the possible creation of a National Museum of Asian Pacific American History and Culture.

In recent months the President has welcomed several performers, including Olivia Rodrigo and the Jonas Brothers, to the White House, most often as part of vaccination efforts.