CBI gets Karti’s custody for questioning till March 6

INDIAINDIA & BEYOND
By Sambad English Bureau On Mar 1, 2018 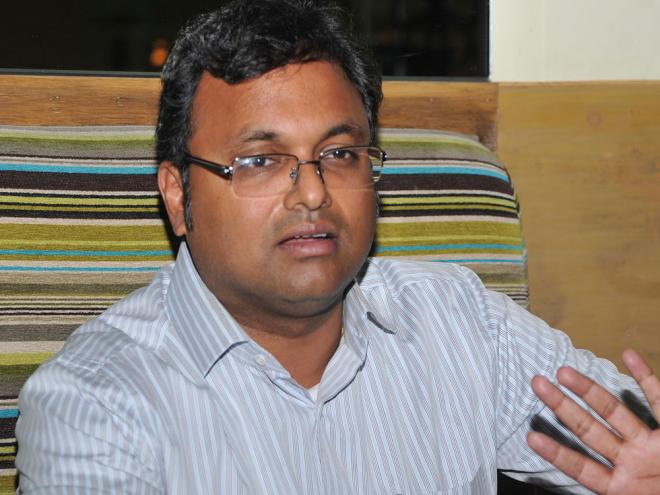 CBI Judge Sunil Rana gave the order after three hours of heated arguments between Karti’s lawyer and the CBI counsel, who pleaded for 14 days custody, saying he needed to be questioned thoroughly in “a serious finance corruption case” which is not a political witch hunt or vendetta.

The Judge disallowed Karti’s plea for home-cooked food but directed that he could be allowed medicines and a medical examination would also be done.

Appearing for the agency before the Central Bureau of Investigation (CBI) court, Additional Solicitor General (ASG) Tushar Mehta said Karti, who was arrested on Wednesday and sent for one day CBI remand, spent the whole night in the cardiac care unit of Safdarjung Hospital and came to the CBI only in the morning.

“He was only questioned for a few hours. It is amazing that despite no history of cardiac problem, doctors advised him to be in the CCU,” Mehta said.

He said one-day custody was not enough to question him and the CBI needed 14 days to interrogate Karti.

Mehta accused Karti and his father, who was then Finance Minister in 2008, connived with each other to get Foreign Investment Promotional Board (FIPB) clearance for the INX Media, headed by murder accused Peter and Indrani Mukherjea, which was earlier accused of serious violations in receiving overseas funds.

The prosecution said Karti needed to be confronted with other accused, including his Chartered Accountant Bhaskar Raman, who is already in custody, and suspects in the case. There was need to travel to several cities for which 14 days custody would be required, he said.

He said Advantage Strategic Consultants, which is linked to alleged illegal payments, was virtually owned and controlled by Chess Management in which Karti is said to have stakes.

In her statement to a magistrate under Section 164 of CrPC, Indrani Mukherjea said she along with her husband had travelled to a hotel in Delhi where they had met Karti.

Mehta said the hotel stay and travel details of Mukherjeas were available with the CBI.

He said the Enforcement Directorate had recovered a hard disk in which it found four invoices relating to the alleged payments. He said there was evidence for money shared at various foreign locations on 33 occasions.

Asserting that there was no witch hunt or vendetta, he said the agency was acting in accordance with the law.

“It is a serious finance corruption case and needs to investigated thoroughly. And thus his custody is required.”

Opposing the CBI plea, Karti’s lawyer Abhishek Singhvi said the agency had questioned him for 22 hours on August 23 and 28 and no summons were issued to him after that.

Asserting that he is a law abiding citizen who returned to the country. He asked “is it possible to arrest a man when he returns back from London”.

“Logical inference is that you (the CBI) have nothing to ask. That’s why you did not issue any summon for the last six months,” Singhvi said in the court.

He challenged the CBI plea on three grounds saying there was no flight risk and Karti was cooperating in the investigation and there no threat of tampering with evidence.

“(Karti) went to London on February 18 after the court proceeding on February 16. What new facts emerged in these 7-8 days?

“The whole issue of arrest is motivated and illegal and not justified. Non-cooperation does not mean that he replies to the agency in the way they want him to.”

Referring to the purported statement of Indrani Mukherjea, Singhvi accused Mehta of making selective leaks to the media.

He also said Karti never owned shares in any of the companies referred to by the CBI.

“All the four invoices (payments) referred to, Karti was neither a shareholder nor a director nor connected with any of them. In two of them, there was no remittance, no receipt of money was found. With the other two invoices also, he had nothing to do,” Singhvi contended.

“How this bribe money travelled to these companies is a billion dollar question that the CBI should explain.”

He also argued that how a son can get paid paid for FIPB clearance through his father who had himself ordered a serious fraud investigation into the matter.

He also alleged that Indrani Mukherjea made the confessions under the compulsion of the CBI as she is in its custody in the case of the brutal murder of her own daughter.

To this Mehta objected and said Indrani was not in the CBI custody but in judicial custody and she has given her statement that needed to be taken as an evidence. (IANS)

The Vagina Monologues: Odisha denizens take a plunge into sexuality