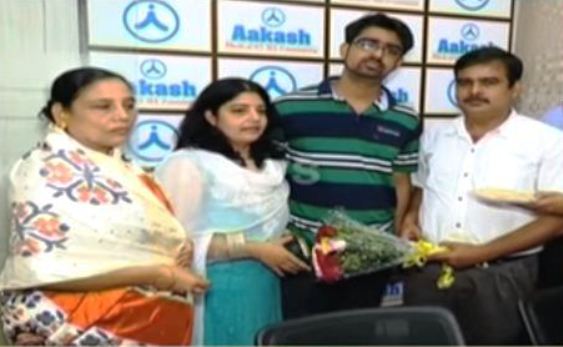 Bhubaneswar: Odisha boy Krisnasish Das, who secured 28th rank in the National Eligibility and Entrance Test (NEET) 2017 conducted by Central Board of Secondary Education (CBSE), aspires to serve his state as a bureaucrat.

“I would like to study MBBS at a premier institute like Maulana Azad Medical College in New Delhi, Armed Forces Medical College (AFMC) and learn as much as possible. I would certainly aim to crack IAS exam so that I can serve Odisha,” Krisnasish said after the results were declared today.

Krisnasish, a Class XII passout from SAI International School, cleared the entrance in the first attempt.

“Good preparation and staying positive holds key to success. Refer NCERT books for Biology and reference books for Physics and Chemistry to secure good rank. You need to play outdoor sports a loot to imbibe positivity,” he shared his success mantra.

Worth mentioning, his mother was suffering from Neurocysticercosis (parasitic disease of the nervous system leading to acquired epilepsy) while his father was posted in Bihar. Due to lack of healthcare facilities, she was brought to SCB MCH for treatment. Then, he made up his mind to channelize his dreams into becoming a doctor.

Notably, his father Arun Kumar Das works for Life Insurance Corporation (LIC) at Cuttack branch and his mother works as a teacher at a private coaching institute.

It may be mentioned here that Punjab’s Navdeep Singh secured All India Rank (AIR) 1 rank with a total score of 697 marks in the male category and Nikita Goyal emerged as topper in the female category. Similarly, Archit Gupta and Manish Mulchandani secured AIR 2 AMD 3 respectively 695 marks.