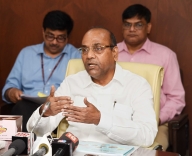 Bhubaneswar: The Central government on Tuesday proposed to set up a dedicated park for machine tools in an area of about 500 acres in Odisha.

Anant Geete, Union Minister of Heavy Industries and Public Enterprises, said if the Odisha government supports, the machine tools park can be set up, which will create employment and help the steel industries.

“My ministry will provide full support to the state government for setting up the industrial park,” said the Minister while addressing a conclave on “Capital Goods in Steel Sector: Manufacture in India” here.

“If the Odisha government agrees to our initiative and provides about 500 acres of land, the machine tools park can be established. This will be second in the country after Karnataka,” Union Steel Minister Chaudhary Birender Singh told media persons here.

He said a total 38 Memorandum of Understandings (MoUs) were signed on the occasion for capital goods manufacturing which attracts about Rs 39,400 crore investment in the country.

About 15 foreign players signed MoUs to invest in India, he added.

Addressing the conclave, the Steel Minister said, “Our initiative to domestically meet the demand of capital goods for the steel sector is a well-thought strategy to develop India into a Global Manufacturing Hub for steel plant equipment and machinery.”

He said the proposed setting up of the facilities will not only reduce imports but will also have a force multiplier impact in the long-term sustainability of the steel industry in India.

“It will be a win-win situation as the multinational companies will bring fresh investments and latest technology to produce equipment and spares of world-class quality at a globally competitive rate,” he added.

Union Petroleum Minister Dharmendra Pradhan said the Union government has planned to achieve steel production of 300 million tonnes by 2030, of which around one-third of steel is expected to be produced in Odisha alone.

This will unleash the growth potential and create opportunities for Odisha, leading to massive expansion and development, said Pradhan.

Odisha Chief Minister Naveen Patnaik said that the state produces about half of the country’s iron ore, which makes it an ideal location for setting up steel industries. (IANS)