ODISHA LATESTTOP
By Sambad English Bureau On May 10, 2021 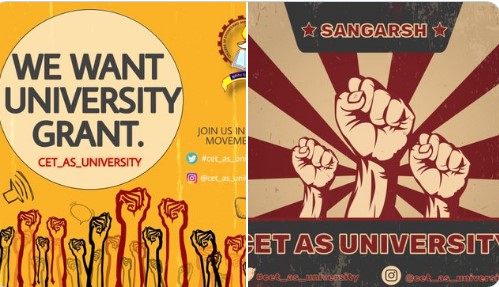 Bhubaneswar: Hashtags #CETAsUniversity and #Sangharsh are flooding the Twitter newsfeed as the virtual protest by students of College of Engineering and Technology (CET) on the social media platform over university status for the educational institution entered third day today.

Tagging the Chief Minister, the Governor and the Skill Development and Technical Education (SDTE) Department, the students warned that they will not withdraw the protest campaign unless the state Government fulfils their demand and accord university status to CET.

Through their posts, the students alleged that nine general educational institutions in the state have so far been declared as university since 2015, but the Government has evinced no interest to declare a single Government technical college as university.

“In 2002, BPUT was established as the state’s first university of technology in Rourkela. After that Veer Surendra Sai University of Technology (VSSUT) was set up at Burla in Sambalpur. Since then no technical university has come up in the state. In fact, no technical college despite having adequate infrastructure has been upgraded into a varsity in the last 12 years. This is why there has been no significant improvement in technical education in the state,” said an educationist.

He questioned as to why CET has not be accorded university tag yet even after having all the criterion, including infrastructure and provision of quality education.

“Over a hundred private colleges have mushroomed in coastal Odisha, especially in Bhubaneswar providing  technical, engineering, MBA, MCA, Pharmacy and IT courses. But is unfortunate that not a single university has been set up for these streams over the last one decade,” a protesting student lamented, demanding that the Government at least provide the status of unitary university to CET to resolve the issues faced  by its students.

A proposal of university tag to CET was given to the Government back in 2014 and in 2016,  group of alumni had met Chief Minister Naveen Patnaik and submitted a memorandum to him in this regard.   In 2018, they had also staged a demonstration at Lower PMG pressing for their demand but all of their pleas have fallen on deaf ears only, alleged a former student.