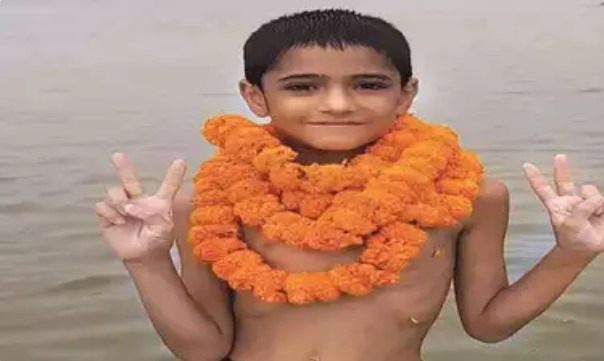 Prayagraj: An eight-year-old boy, Shivansh Mohile, from Uttar Pradesh’s Prayagraj has set a record of sorts by swimming across the Yamuna river in just 18 minutes.

Earlier this month, Aradhya Srivastava had crossed the river ( about 250 metres) in 22 minutes.

However, Shivansh stunned his trainers who appreciated his efforts and determination to cross the river in less time compared to other boys of his age group.

Shivansh, who is a student of class 2 at Tagore Public school, accomplished his swim from Meerapur Sindu Sagar ghat and reached the other side of the river bank.

His trainer, Tribhuwan Nishad said that the boy has brought laurels for his parents after he crossed the Yamuna river in just 18 minutes.

He added that there are currently 100 children in all age groups undergoing training at the Navjeevan Swimming Club.

Nishad, meanwhile, said that Shivansh is now the first trainee swimmer from the age group of 2 to 8-years-old this year who has earned laurels for his feat.

He said that as many as five boats were accompanying the boy for emergency assistance, if required during the exercise.